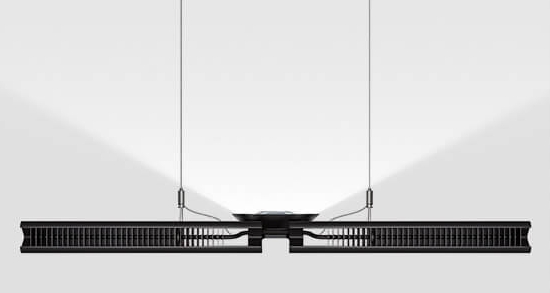 May 24, 2016 – Dyson Canada was recently rolling out some lighting (and air dryer) glam at the Royal Ontario Museum in Toronto for a special event geared to architects and specifiers and EBMag was there to capture a new LED product introduction.

Dyson Lighting, the newest category in the business, launched in Canada earlier this year with the CSYS task lights. The Dyson Cu-Beam, a suspended fixture, will be released later in 2016 but made an appearance at the ROM last Wednesday evening. The Cu-Beam can be a downlight or uplight and uses a single high-power LED along with heat pipe technology for a cooling system. This technology uses six vacuum-sealed tubes that span the wings of the lights, Dyson explained, each containing a drop of water.

According to the company, the lights work like this: “When the light is switched on, the heat generated by the LEDs turns the water inside the tubes into vapour. The vapour begins moving along the tubes due to the difference in pressure. As soon the vapour reaches a cool area of the tube, it condenses back into water. Heat energy is dissipated through a series of aluminum fins, which form the light’s wings and a copper wick draws the water back towards the LEDs via capillary action, and the cycle begins again.”

Dyson was also celebrating the installation of its 2-in-1 Airblade Tap hand-dryer products in the ROM’s bathrooms.

See yourself in here? Want a copy? Email rfrancoeur@annexweb.com.