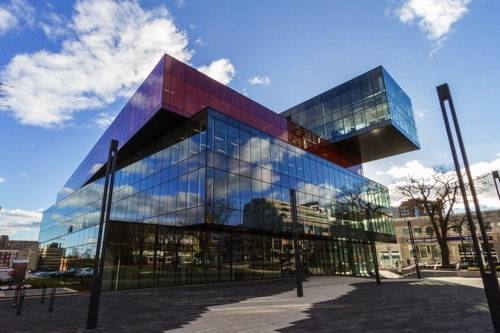 January 19, 2017 – Two years after officials sliced through its opening ribbon, the jutting, Jenga-like Halifax Central Library continues to reel in the accolades.

This year it received a Governor General Medal in Architecture from the Royal Architectural Institute of Canada (RAIC) and the Canada Council for the Arts, following up on its Lieutenant Governor’s Design Award in Architecture for 2014. It was also shortlisted for World Building of the Year in 2015, made the cut south of the border for CNN’s list of 10 “eye-popping new buildings for 2014” and was hailed as one of the 10 “most beautiful libraries on earth,” according to Wired.com.

Danish firm Schmidt Hammer Lassen Architects collaborated with local architects Fowler Bauld & Mitchell on the design of the library, located at the corner of Spring Garden Road and Queen Street. Mirroring a stack of books, the 160,000-sf structure (including the parking lot) is composed of four glass blocks of varying dimensions—all of which follow the path of surrounding streets. The topmost block is a public space known as the Halifax Living Room.

Michael MacDonald, a project manager with the City of Halifax, echoes how beautifully the library turned out. He also notes that, when it came to the less pretty stuff—the guts and the electrical work—electrical contractor Easco showed “they really knew their stuff”.*

“It was business as usual,” says Keith Dwyer, Easco president. “We do large commercial projects on a regular basis. The thing that was so unique about this one was that it was such a high-profile build.”

Established in 1979, Easco has also worked on the Halifax Casino, the Arrivals terminal and parking structures at Halifax Airport and Nova Scotia Power’s corporate headquarters, to name just a few of its projects.

Dwyer is right about the library’s profile: a huge amount of public consultations (starting in 2008) took place throughout the planning and building stages, including one featuring a 3-D video tour of renderings.

“In addition to five large public meetings, library staff and architects met with a number of special focus groups to ensure that the library heard the voices of a wide cross-section of customers and citizens,” reads the library’s website.

While it was great for community engagement, MacDonald notes the extensive consultation process did slow down the overall schedule.

“The library group wanted certain finishes on the interior wood floor and a specialized metal linear ceiling. These were two items presented to the public, and they felt it should be included […] so that extended the project because of the nature of those speciality projects. It took longer to get them, took longer to install,” MacDonald says.

Construction teams broke ground in April 2011 and put on the finishing touches in August 2014, opening to the public that December. It might have been eight months behind schedule, but it came in on budget, MacDonald says, at just over $57 million.

“Our schedule was also put back by about four months or so because it was challenging for the concrete form contractor to get sufficient labour. There was a lot of building going on in downtown Halifax at the time, so that was a real challenge.”

According to MacDonald, the biggest challenge was getting the library to be weathertight, as all the exterior skin is a curtain wall, so it was important to “manage the design and delivery of that [curtain wall] and still have the trades inside working.”

To make this work, the drywall was changed “from a certain height above the floor up to the underside of the ceiling for all the partitions to bolster the resistance drywall”, MacDonald explains.

“That way, the drywallers could install that early, and the mechanical and electrical teams could penetrate those walls and not have to wait for the regular drywall to be installed.”

These partitions can be moved to accommodate new collections or library displays, the library notes, without compromising on or limiting electrical connections.

The interior was no piece of cake, either, as bridges and staircases snake across the big, open atrium in a number of different directions, further enhancing the look of a “jumbled book” the designers were chasing.

For Easco, meantime, it was the metal slat ceiling that posed the tricks.

“Coordination had to be very specific,” Dwyer says. “You couldn’t just put the lights anywhere you wanted… That ceiling was all on aircraft cable, so lights had to be hung on a very specific, pre-determined spot as to not interfere with the ceiling system.”

How did Easco work with the touchy, suspended pans?

“We just used a laser to combat that problem. So that worked pretty good,” Dwyer says.

All the better to read by

“It was a pretty standard project when it came to conduit,” Dwyer continues. “The fixtures were fairly modest as well.”

He says most of the lights are LEDs from Acuity Brands, but the parking garage sports fluorescents.
The library also uses Acuity’s nLight digital lighting control system, which Dwyer calls “one of the first generations of addressable control systems”.

While plenty of glazed glass windows allow for solar heating and natural daylighting, nLight is an automatic occupancy and daylight responsive control system to reduce lighting use. It consists of occupancy sensors, photocells, power packs, wall switches, dimmers, panels, SensorView software and luminaires. nLight zones are wired together using Cat 5e (in any order, daisy-chain recommended, according to Acuity Brands) and may have a single or several different type of devices.

“It’s networked with the building automation system,” Dwyer adds. “So it has the capability to know when a motion sensor goes off. It then activates that zone for lighting and HVAC.”

“You have to have the right team for the project,” MacDonald notes. “We hired the construction manager, EllisDon, before we did any tendering, so they’re sitting at the table providing direction and comments as we’re designing with the architects, so we can maintain our budget.”

There were 92 different trade contracts in total.

“EllisDon put together the packages on what trade should start running first. Then there was sequential tendering. This means we were tendering the project prior to the design being complete, so there is a risk that you’ll miss something. Coordinating the dots between tender packages is a big issue,” MacDonald explains. “The positive is we were able to control the budget and the quality of products this way, and it reduces a lot of conflict between trade contractors.”

The Halifax Central Library may have lost the World Building title to a small structure with slanted bamboo roofs in Vietnam, but it remains a hard-to-miss focal point for the harbour city, nonetheless. The library reported 1.9 million visits during its first year of operation—more than double what it had expected.

Sights on the gold

Halifax Central Library recently received LEED Gold designation from the Canada Green Building Council due to the sustainability vision it incorporated. Check out some of these other energy efficiency features it boasts:

Note
* Employee-owned CBCL Consulting Ltd., whose offices span Atlantic Canada, was also involved in some of the electrical work, but we were unable to reach them for comment.

This article also appeared in the January 2017 edition of EBMag. Check it out here: www.ebmag.com/digital