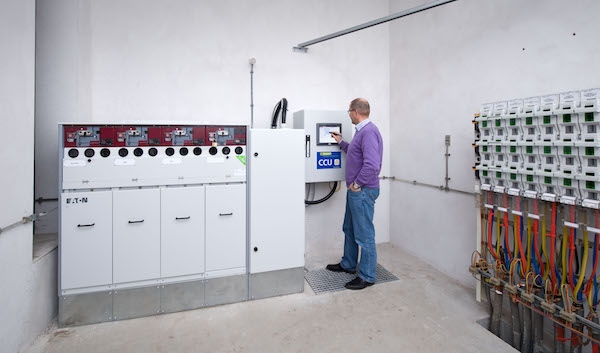 September 12, 2018 – Eaton has produced its 100,000th Xiria panel, marking a major milestone in the development of SF6-free medium-voltage (MV) switchgear for controlling and protecting electrical equipment.

SF6 is a proven insulator, but among the most severe greenhouse gases (GHGs), reportedly 26,000 times worse than carbon dioxide (CO2). The European Commission is starting a wide-ranging review that could result in a decision to ban SF6 from MV switchgear by 2020.

Eaton has produced MV switchgear that is 100% free of SF6 gas for many years, using solid insulation instead. Xiria panels (examples pictured) are used by customers in more than 30 countries, including commercial building owners, utilities and operators of distributed renewable generation assets, such as solar farms and wind turbines.

After the Kyoto Protocol in 2007 identified SF6 as one of the worst gases behind global warming, the European Union (EU) banned it for most uses, including sport shoes, tennis balls and other applications, but a loophole was granted for MV and high-voltage (HV) switchgear in 2014. That loophole would be closed if the complete ban were imposed by 2020.

“Xiria was introduced in 2002,” says Ardo Leijen, marketing and product manager for Eaton. “We are well ahead of our time!”