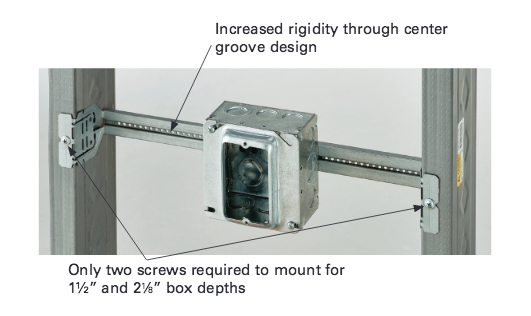 July 19, 2016 – Eaton has unveiled the redesign of its largest B-Line series mounting bracket sets for electrical, mechanical and telecommunications applications: the BB2-16T and BB2-24T.

Now available in the Canadian markets, the brackets have a telescoping design that allows for varying stud wall spacing and a centre channel for “better rigidity”.

Using Eaton’s mounting brackets, commercial contractors have the ability to mount electrical and data boxes on up to four different box depths. Eaton says the end flanges will bend the same as the existing design for 1 1/2-in. deep and 2 1/8-in. deep boxes. They can also be cut and bent for deeper boxes—such as multi-gang (2 1⁄2-in. deep) or 5-in. square (2 13/16-in. deep) boxes.

Eaton’s brackets are Underwriters Laboratories (UL) listed for Canada and support most standard boxes. All mounting brackets are made of pre-galvanized steel and are shipped pre-assembled.