“Our employees, customers and suppliers are the heart and soul of our fundraising campaign for BC Children’s Hospital.” 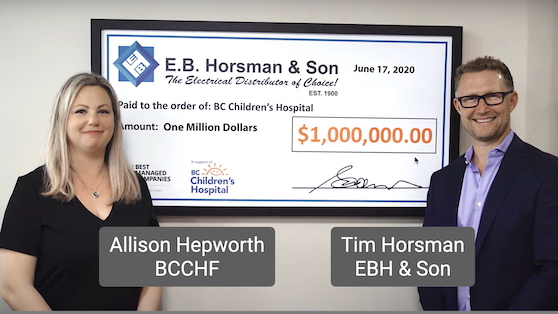 September 16, 2020 – Congratulations to E.B. Horsman & Son, which not only doubled its fundraising efforts for the BC Children’s Hospital Foundation this year, but whose efforts over the years have led to a cumulative donation of $1 million.

This is EBH & Son’s 120th anniversary year, and its employees, suppliers and customers managed to double their fundraising efforts—despite the pandemic—to donate over $100,000 to BCCHF.

“Our employees, customers and suppliers are the heart and soul of our fundraising campaign for BC Children’s Hospital,” said Tim Horsman, president and CEO.

Giving back to the community is by no means a novelty with this electrical distributor. Back in 2012, EBH & Son was recognized for its efforts with the first-ever Giving Back Award at the 2012 AD North American Meeting of the Electrical Supply Division.

EBH & Son has been supporting BCCHF since 1993. Funds raised are designated to two areas of significant demand:

• Excellence in Child Health Fund, which supports equipment, research and program needs within the hospital.

• “Beads of Courage”, a program within Oncology that supports children facing major surgeries, difficult procedures, and long hospital stays away from home. Each bead they receive symbolizes a specific procedure or significant event, thereby reminding them of their strength and encouraging them to soldier on.

“We are so proud of the incredible collective effort to reach this $1 million milestone in our 120th anniversary year,” Tim Horsman added. “As our company has grown across Western Canada, so, too, has our support for pediatric hospitals and healthcare in Edmonton, Calgary and Saskatoon.”

E.B. Horsman & Son was established in 1900 in Moosomin, Sask., and has Platinum Club status in the Canada’s Best Managed Companies awards program.