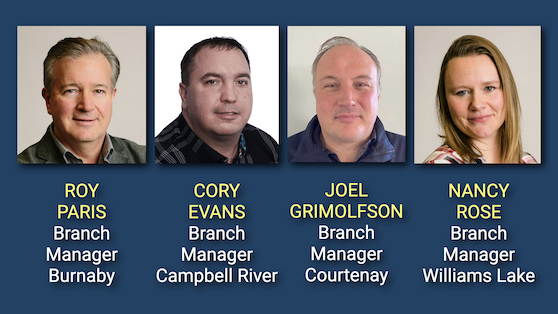 Roy Paris is now branch manager, Burnaby. He started his career as a process control & electrical supervisor in overseeing trades personnel for the forest industries. Roy initially joined EBH & Son in 2018 as a business developer in the PAC Division (process, automation, controls).

Joel Grimolfson is now branch manager, Courtenay. He started with the company in June 2003 in inside/counter sales, and was then promoted to the role of customer service manager. In 2018, he took on an account manager role serving the Courtenay, Comox and Powel River territory.

Cory Evans is now branch manager, Campbell River. He began his career with EBH & Son as warehouse & counter sales rep from 2004 to 2008. He then transitioned to a customer service manager, then took on an account manager role in 2019.

Nancy Rose is now branch manager, Williams Lake. She started her career with EBH & Son in 2016 as counter sales rep; later that year, she moved to a customer service manager role. Before emigrating to Canada in 2009, Nancy worked at an electrical wholesaler in Germany.