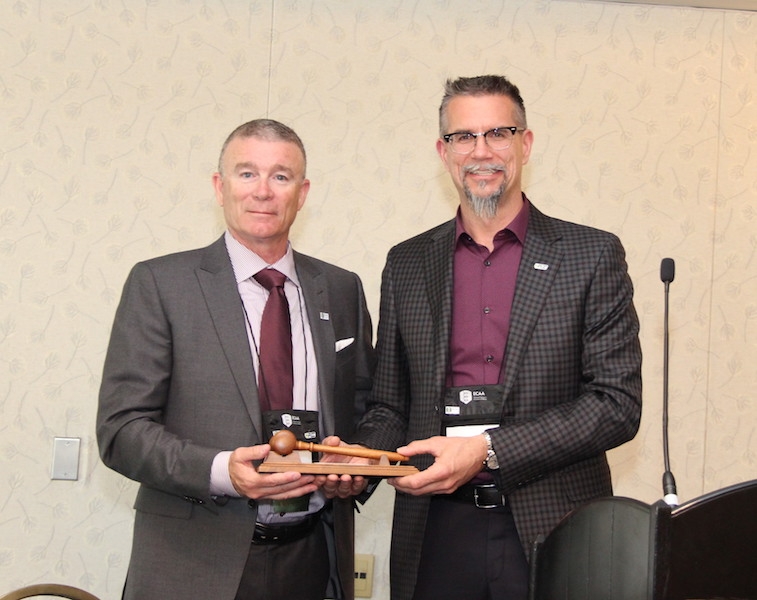 November 16, 2017 – I can’t go wrong whenever work takes me to beautiful Banff, Alta., but combine that location with ECAA’s 55th Anniversary Convention & Technical Training Day, and you have a winning recipe.

I’ve said it before… Sheri and her team at Electrical Contractors Association of Alberta do a great job assembling speakers who deliver informative, timely presentations at the association’s training days, and 2017’s instalment was no exception.

(Unfortunately, I can’t be in all sessions simultaneously, so my wrap-up below is missing some of the other sessions.)

NETCO update: Carol MacLeod
An alliance of the Canadian Electrical Contractors Association (CECA) and IBEW, the National Electrical Trade Council’s (NETCO) is mandate is to provide a national forum for collaborating on the development of a “certified, highly skilled and mobile workforce”. A champion of the Red Seal program, the council also promotes the idea that safety = qualified electricians working for electrical contractors under electrical permit.

Its executive director, Carol MacLeod, was there to provide an update on the council’s activities.

Among the council’s priorities are green skills training and certification, such as NETCO’s “train-the-trainer” Electric Vehicle Infrastructure Training Program (EVITP), where NETCO maintains the curriculum, which is free to all trainers. Carol reiterated that NETCO’s certification programs are available to anyone who meets eligibility requirements; they do not require membership in any association.

I also learned NETCO had signed an MoU (Memorandum of Understanding) with Plug’n Drive to develop an EV “entry point education module”—informed by the EVITP curriculum—for students in Grades 11/12 as a pathway to electrical apprenticeship.

CE Code: Section 10, Rene Leduc
At CSA Group’s 2014 Committee Week in Charlottetown, Rene Leduc got the green light from the CE Code-Part I Technical Committee to undertake a rewrite of Section 10, “Grounding and bonding”. Three years later, he was in Banff explaining some of the changes to be expected in the CE Code 2018 edition.

That said, some of the proposed changes won’t be found in the 2018 code. For example, “We proposed a definition for ‘protective bonding conductor,’ but got a lot of pushback,” Rene noted, “So maybe in 2021”.

Another definition that won’t be in the 2018 edition is for “equipotential bond”. It may make the 2021 edition, by which time, Rene hopes, we’ll even see a better definition for “grounded”.

Grounding conductors must be of an acceptable material (copper, aluminum, other) that “resists corrosion in its installed environment”. And, when you see -40ºC on a cable, it does not mean the cable can be installed at -40ºC, Rene explained, but rather the cable was tested for impact/crush at -40ºC.

Too many bids fail because of incorrect or incomplete information so, when bidding, “Use the correct form. Make sure it’s complete, with the proper date, and signed. Do not alter the bid form text. Don’t be late,” Alan explained, suggesting attendees also “refer to the Bid Evaluation Checklist that we use. It will be helpful to you.”

Common bid bond issues Alan sees include not including the original, and incorrect information regarding the owner, the date, project amount, etc.

Criminal checks may be involved, depending on the project you’re bidding (e.g. courthouse, school). For buildings that are already operational, Alan advises you to “make sure you are aware of and follow Facility Emergency Response Plans” (e.g. lockdowns).

“You must follow FOIP when working with us,” Alan stated. FOIP is Alberta’s Freedom of Information & Protection of Privacy Act, however: “FOIP only applies to records of the contract, not your own operations, employees, etc.”

“We can only pay for goods and services actually received,” Alan warned. “So if material is in transit, but not onsite, we cannot pay you for it… so don’t bill me.”

As for getting paid, Alan explained the Public Works Act allows you to make a claim directly to the Province when you haven’t received proper payment. However, you cannot lien a public work. “It’s for the public. It cannot and will not be sold off to satisfy payment issues.”

“To move along claims for payment faster, we’ve made invoicing requirements clearer; we will pay verified amounts within 30 calendar days of receiving the invoice,” Alan said. Generals must pay their subs within 10 days of receiving payment from Alberta Infrastructure, Alan continued, adding that 15 days prior to that, generals are notified of the amount of the payment they can expect from the Province.

Project Quality: Rob Colclough
I first listened to Rob Colclough speaking on the subject of project quality at ECAA’s 2014 Training Day, where he emphatically stated “We should be ashamed over the existence of rework crews”.

His message at 2017’s Training Day was not dissimilar, though it had a twist: Rob mentioned there’s a move afoot to combine safety and QC into one role, as they are both very similar in reporting, and safety training is important to producing a quality job.

But what exactly constitutes a quality job?

“A quality job means building it according to client spec… that’s all,” Rob explained, and you get there by setting the right culture in your company. Don’t mistake grade with quality, Rob warned. For example, the BigMac is a low-grade burger but also a high-quality burger because, you guessed it, it meets spec.

Rob also went over an Inspection Test Plan (ITP), which is a plan showing who in your organization will inspect what and when, and to what standard or protocol. The plan also communicates the Hold & Inspect points for everyone involved.

Other highlights
Leann Wagner, assistant deputy minister, Alberta Labour, presented highlights of Bill 17, Labour Relations Code. She says the government chose not to tackle “double-breasting”, but proposes a hybrid system for certification, under which the union requires 65%. Anything less, and it goes to secret ballot.

The Employer Liaison Service pilot is about encouraging employers to hire domestic workers over temporary foreign workers. Electricians are also on this list, Leann explained, adding there is currently a surplus of workers in all electrical disciplines except electrical & engineering technologists.

D.M. Stoneman of ICF was also on-hand to explain Energy Efficiency Alberta’s Business, Non-profit & Institutional (BNI) Energy Savings Program. (ICF is the company contracted to administer the BNI Program.) He expects the lion’s share to involve lighting and controls, and he noted only organizations currently serviced by an existing Alberta electric or gas utility are eligible. The BNI Program also offers a pre-approval process; essentially, apply to the program beforehand and, if your project is approved, money will be set aside for it.

Sheri McLean was recognized for serving ECAA for 25 years (congratulations!), and outgoing president Darrell Castor passed the gavel to incoming Eric Fadden. 2018 will be another milestone year, as the Professional Electrical Contractor (PEC) program celebrates its 25th anniversary.

My Photo Gallery contains shots from the sessions, the Welcome BBQ (where all sponsors were formally brought up and recognized), and the President’s Gala. (Photos A. Capkun)

— Photos A. Capkun. See yourself in here. Want a copy? Email acapkun@annexweb.com .