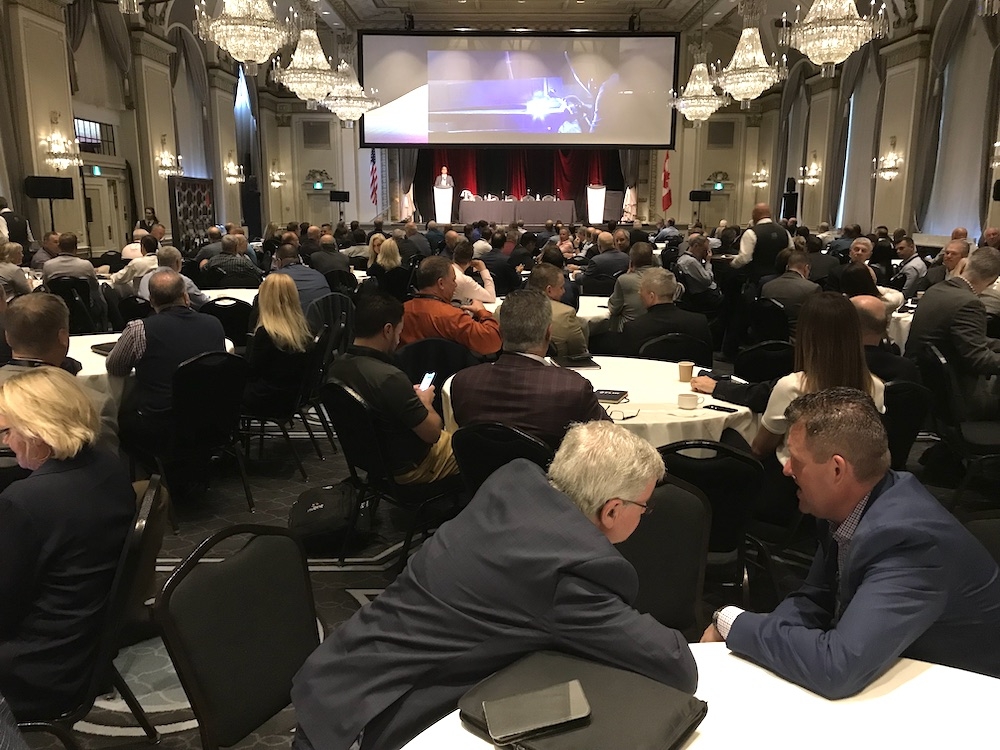 It’s a full house at the Fairmont Le Château Frontenac in Quebec City for EFC’s annual conference. Photo A. Capkun.

June 4, 2019* – Close to 550 Canadian electrical industry players flocked to Quebec City last week to attend the annual conference of Electro-Federation Canada, themed “Powering a Changing World”, and EBMag’s Jennifer DiIorio and I were there to enjoy the company.

EFC is a national, not-for-profit industry association representing over 220 member companies that manufacture, distribute, market and sell a range of electrical products… basically, all the folks you read about in Electrical Business Magazine and at EBMag.com.

The weather proved just right… not too hot, just comfortable overall. It was perfect for conference-going (especially when you’re fully geared up in suit-and-tie as I was) and, of course, sightseeing in one of North America’s oldest European settlements.

And the city did not disappoint! If you ever get the opportunity to visit the Quebec City for a few days (the old parts, specifically), don’t hesitate. You’ll be walking through history. And if you rent a car (as I did), watch out for the funky traffic signal posts on boul. Honoré-Mercier: I honestly thought they were pieces of art until I (very) nearly ran a red.

Conference highlights
But back to the conference, which always serves as a great meeting place between manufacturers and their distributors, and the independent sales reps who work with them. Unlike some other years (i.e. 2009), the mood among this year’s delegates was positive.

EFC made it very clear to the assembled membership that their aim is to continue to promote (and expand) the value proposition it provides. That said, they also reiterated the importance of member engagement by getting involved with EFC activities, responding to surveys, joining committees, participating in the annual Marketing Awards (of which EBMag is a sponsor, so get your submission ready!), and so on.

A new EFC chair was announced at the conference: Mark Schroeder of Rockwell Automation, who replaced outgoing chair Peter Horncastle of Graybar Canada. Mark mentioned that one of EFC’s initiatives moving forward will be to establish a new Manufacturers’ Group. What the group will do or how it will complement EFC’s other groups/committees is something we’ll likely learn more about in the coming weeks.

Carol McGlogan, EFC’s president & CEO, highlighted another association initiative: codes & standards. She discussed the need for a stronger voice at the global codes & standards table, and the importance of harmonization to help EFC’s manufacturer members get their products to market globally without undue hardship.

Leonard Brody, the keynote speaker on Day 1, discussed his premise of “The Great Rewrite”, leaving some delegates agreeing with him wholeheartedly, most partially, and some not at all. Brody contends:

I believe that over the last hundred years we have physically been rewritten as people, but what’s happened since the rise of the consumer internet is we have in the last 25 years become unrecognizable in our behaviours. You are not the same people that walked on this planet 25 years ago.

To read a version of the same presentation he delivered in Quebec City, CLICK HERE to access his presentation “The Great Rewrite” from the 2017 Coca-Cola CMO Summit.

Swati Patel, director, Research & Communications, presented EFC’s latest research “Electri-fyi: Exploring Electrification Trends and Opportunities in Canada”. The report defines “electrification” as “the process of converting a machine or system to operate using electricity when it previously used another form of energy”.

The main objective of this whitepaper “is to provoke reflection on what electrification means for your business: how it will affect your operation; the product and service opportunities that may arise; and how to adapt to stay competitive”. I strongly encourage you DOWNLOAD the white paper (PDF) and think about the ways we can all fit into—or adapt to—an increasingly electrified world.

Recognizing the exemplary
As part of their annual gathering, EFC recognizes several individuals/organizations during its Awards Dinner. Congratulations to this year’s recipients:

It’s a full house at the Fairmont Le Château Frontenac in Quebec City for EFC’s annual conference. Photo A. Capkun.

• Rexel Canada Electrical Inc., recipient of the Corporate Engagement Award. The award was presented by Carol McGlogan of EFC.

• Salim Bhojani, Westburne, recipient of the Trailblazer Award. The award was presented by Jason Prevost of Leviton.

Meantime, the Canadian Electrical Manufacturers’ Representatives Association—which operates under the auspices of EFC—selected NEMRA’s Ken Hooper as CEMRA’s Person of the Year. The award was presented by Cindy Doherty of Intralec.

Next year’s EFC Annual Conference returns to beautiful Banff, Alta., May 26-28, 2020. Stay tuned to EBMag.com for details as they become available.