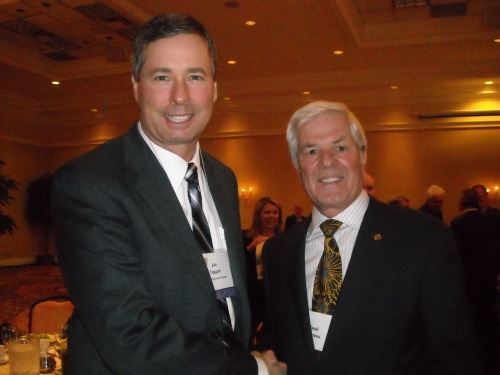 Jim Taggart, president and CEO of EFC, and René Marineau

Marineau has been actively engaged in the Canadian electrical market for numerous years, said EFC, adding “ as a past board member, he was participated in EFC-S&D Quebec Region activities and promoted the value of this participation to his employees.”

Known as “the most approachable company president,” described EFC, Marineau had been with Canlyte Inc. for 35 years. He began his career in the electrical industry as a marketing manager and in 1992, he worked his way up to become president of Lightolier-CFI, and then in 1999, he took up his final post as president of Canlyte.

The Industry Recognition Award is presented annually to an individual who, according to the EFC, has influenced the Canadian electrical and/or electronics industries, either as a current or retired industry delegate, or as an industry supporter. Award recipients must demonstrate strong leadership through their personal and professional industry involvement and symbolize dedication, balance, and achievement in regional, national and/or community activities. A nomination committee, which consists of select EFC members, calls out to members for nominations early each year.

CLICK HERE to see more photos from the event.