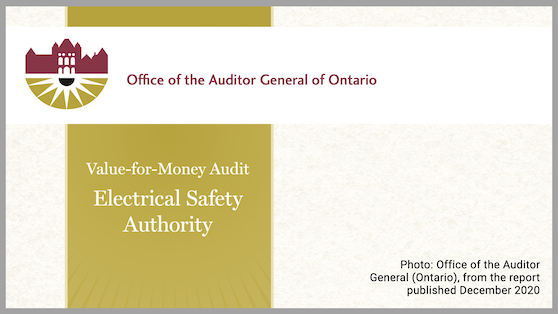 December 7, 2020 – “Overall, we found that the state of electrical safety in Ontario has improved over the last 10 years,” said Ontario Auditor General Bonnie Lysyk in her 2020 Annual Report. “However, the Electrical Safety Authority has been unsuccessful in preventing illegal electrical installations—a problem that is widespread in Ontario.”

The Auditor General’s office undertook this audit after receiving a request from the Minister of Government and Consumer Services. It conducted the audit under Section 17 of the Auditor General Act to assess ESA’s role in inspecting electrical installations, licensing electrical contractors and preventing illegal electrical work and products.

“The Electrical Safety Authority could operate more efficiently in carrying out its mandate to improve public electrical safety, and could focus more of its resources on inspecting more complex electrical installations,” Lysyk added.

The AG’s report “Value‐for‐money audit: Electrical Safety Authority” (December 2020), says the self-funded, provincially mandated authority conducts many unnecessary inspections that do not improve public safety. The audit found the inspections are done to generate revenue for ESA to fund its workforce and operations.

ESA also collects additional fees by offering inspections, safety training and other services outside of its legislative mandate. In 2019/20, the authority’s revenue was about $113.3 million.

The AG’s report also says ESA is supposed to set its fees so that they encourage compliance with the Ontario Electrical Safety Code. However, homeowners are charged more for an ESA inspection when they do the work themselves. For example, to inspect an electrical panel box installed by a licensed contractor, ESA charges $79.00. Were the installation done by a homeowner, the same inspection costs $184.00. This could discourage homeowners from notifying ESA about their installations.

The auditor general’s audit also finds that, between 2015 and 2019, ESA collected $17 million in fees and issued 133,000 certificates of inspections for inspections that did not happen… mostly because inspectors did not have time to do them.

“Public safety is our top priority and ESA looks forward to using the Auditor General’s recommendations to further our journey toward a modern and results-based regulator while reducing burden for businesses in Ontario,” said David Collie, president & CEO, ESA.

Background and other findings from the Auditor General

• ESA operates as the most-costly delegated authority in Ontario.

• ESA issued certificates of inspection for installations it did not inspect, and for which it still collected $17 million in inspection fees.

• ESA does not have inspection checklists that all inspectors are required to follow when inspecting electrical installations.

• When inspections are scheduled, ESA does not consider whether inspectors have sufficient time to complete them.

• ESA conducts many unnecessary inspections that do not improve public safety. The inspections are done to generate enough revenue for the agency to fund its workforce and operations.

• ESA’s Call Centre employees are not trained to answer technical questions about electrical installations, and forward calls to inspectors—but only when the caller has already paid for an ESA inspection.

• ESA has not been able to deal with the widespread availability of uncertified electrical products online.

DOWNLOAD THE FULL REPORT ESA Value for Money Audit DEC2020 (PDF, December 2020), published by the Office of the Auditor General of Ontario.

The Office of the Auditor General is an independent office of the Legislative Assembly that conducts value-for-money and financial audits of the provincial government, its ministries and agencies. It also audits organizations in the broader public sector that receive provincial funding.