News
EEL and Ultrasave move in together in Markham, Ont. 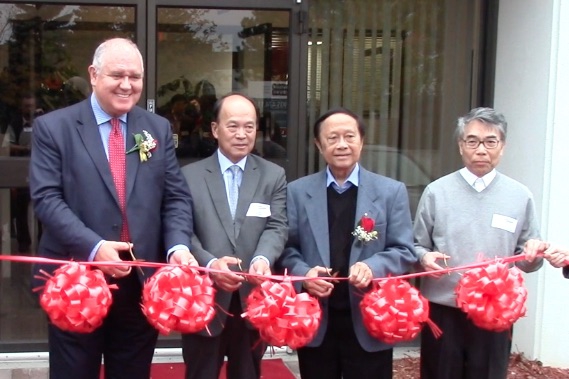 (VIDEO added Nov 21, 2015) October 22, 2015 – Energy Efficient Lighting Co. (EEL) and Ultrasave Lighting recently celebrated the official grand opening of their new facility in Markham, Ont. This two-unit, 33,000-sf building has been the new home for both companies since late July 2015.

“The joint move to a larger space, has allowed the two companies to operate totally independently, which is something that we needed to achieve in order to improve our operations, since Energy Efficient Lighting opened its doors in 2013,” said Francis Chan, general manager at Ultrasave.

Ultrasave says it has been engaged in ballast manufacturing for more than 20 years and noted its products are tested in-house at the UL certified lab also in Markham. Meanwhile, EEL says its main focus is LED lighting fixtures.

The new facility at 331 Amber St. boasts a complete conversion of their lighting system to LED units, the companies say. Many of the original lighting fixtures around the offices, and shared warehouse, were reused and converted to LED using retrofit kits. These kits, sold by EEL, allow each existing fixture to be reused and converted to LED in around 10 min/per unit, EEL says. The new warehouse LED units also incorporate EEL motion sensors that turn the lights off when there is no activity.

“This simple innovation, just on its own, will save so much on hydro bills, and the most exciting thing about converting to LED is that it pays for itself, usually within the first year,” Chan says.