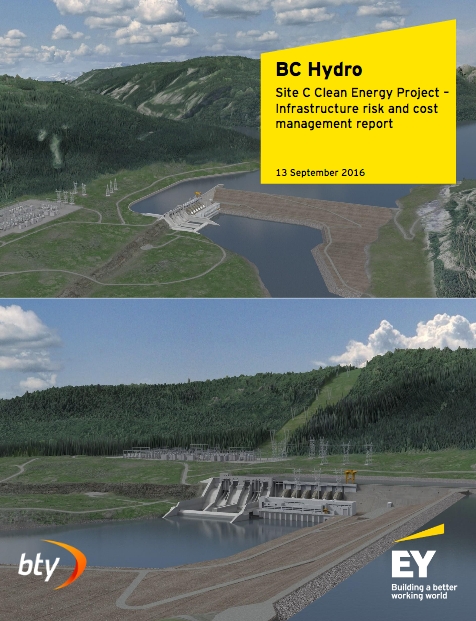 October 13, 2016 – BC Hydro has released an independent review of the Site C project’s risk and cost management processes by Ernst & Young LLP and BTY Consultancy Group Inc., who found it “well defined” and that the “processes for managing risks and costs are largely representative of leading practices”.

During July and August 2016, Ernst & Young and BTY reviewed over 100 project documents, interviewed senior project personnel and conducted a site visit, according to BC Hydro.

“Given Site C’s early stage in its lifecycle, our review did not find any evidence to suggest that major project milestones and financial targets will not be met. Overall, the Site C project is both clearly defined and well-planned”, the report states. “While project execution risks do exist, those risks are well-understood and managed by the project team.”

The report also noted, “Site C benefits from best-in-class software that BC Hydro has implemented and integrated over the past five years, including SAP, P6 (Primavera), HeavyBid, Unifier and others.”

The Ernst & Young/BTY study also provided a list of recommendations for BC Hydro to consider going forward, such as using an interface manager and team and commissioning an independent review of the project schedule at “a work package-by-work package level”. The utility says it has considered the recommendations and developed an action plan to address them.

For more information and to read the report, visit sitecproject.com or download it below.