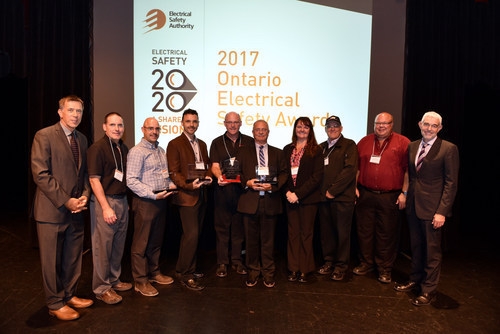 The awards were presented by Brian Bentz, chair of the board, and Kevin French, MPP.

“All of us at ESA know that to achieve a more electrically safe Ontario, we can’t do it alone,” said Scott Saint, Chief Public Safety Officer, ESA. “That’s why we’re so grateful for, and so impressed with, this year’s winners. They have shown incredible leadership to systematically address electrical safety issues. By celebrating their accomplishments, we hope to inspire others to meet the high bar set by these organizations.”

The Corporation of the City of Timmins took home the award for Powerline Safety for identifying a safety risk with its snow removal dump trucks and taking action to reduce the risk of powerline contact. The city has installed box buzzers on all city-owned dump trucks, and required that contractors hired for snow removal have a box buzzer system in their trucks to alert them while the box is raised, reducing the risk of powerline contact.

Finally, Honda of Canada received the Chief Public Safety Officer’s Special Recognition Award for its commitment to workplace safety in its Alliston, Ont. facility, including the implementation of CSA Z462 “Workplace electrical safety”.

ESA also presented an Honourable Mention distinction to Fire Chief Brian Wilson, Clarence-Rockland Fire, for his efforts to ensure homeowners received flood safety information as they faced the potential of electrical hazards due to severe flooding in the region in May 2017.

The awards were established in 2010 to formally recognize the important contributions of individuals and organizations toward achieving ESA’s vision of an Ontario where people can live, work and play safe from electrical harm.