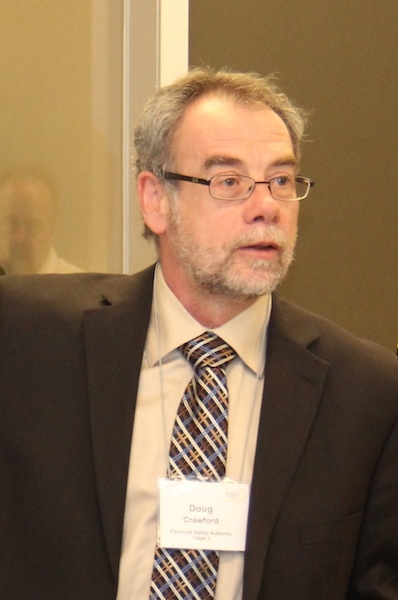 (Updated May 8, 2012) January 9, 2012 – David Collie, president and CEO of the Electrical Safety Authority (ESA), has announced that Doug Crawford will join ESA in late January as vice president and chief public safety officer.

Crawford joins ESA from the Office of the Fire Marshal (OFM) of Ontario where he was deputy fire marshal. His experience in harm prevention strategy and management of OFM activities is an excellent fit with ESA and the role of the chief public safety officer, said ESA.

“We’re extremely pleased to have someone with such deep experience step into the role of ESA’s chief public safety officer,” said David Collie. “We have worked with Doug in his capacity as deputy fire marshal on a number of shared safety initiatives. He brings great knowledge, experience, and insight.”

In that role, Crawford developed strategies and policies with the Fire Marshal of Ontario to reduce fire risk and loss, provided advice to government on public safety issues, managed internal and external stakeholder relationships to advance safety, and led a team with accountability for investigations, regulatory development, Fire Code administration, and research.

He also developed a system with the OFM to identify fire safety trends and emerging issues, and led the implementation of different amendments to the Ontario Fire Code, and chaired a national organization that provided policy advice on such issues as harmonizing codes across provinces, development of a National Energy Code for buildings and updating the National Farm Building Code.

Prior to joining the Ontario public service, he worked as a project engineer for two consulting engineering firms. He holds a Masters in Engineering from the University of Toronto and is a registered professional engineer.

Crawford succeeds Peter Marcucci, who retired from ESA in December 2011. EBMag was there at his farewell party which was held on December 1.