May 20, 2020* – Meet Joe. Joe is an electrical contractor. He is running a business and has a small crew working for him. His business is growing but he knows he needs to quote more jobs to keep doing well. Joe does most of his estimates after hours because he is on the go from 7:30 am until 7 pm.

Joe was working through a set of specs and drawings one evening when his phone rang. Joe kept working while he talked on the phone about a job his crew were working on the next day. After getting everything worked out, Joe went back to his estimate. Happy with his quote, he submitted his bid. Joe got the job.

The first day on the jobsite, Joe’s crew found there were two LED fixtures missing. That night Joe went through his quote and checked his count. He had missed two fixtures. No big deal, right? Wrong! Joe now has to eat the cost of the two fixtures. It gets worse.

And now the real cost… labour!

The cost of the labour to install the conduit, wire, connectors, straps, elbows, wire, junction boxes, covers and wire connectors will come out of Joe’s pocket. And don’t forget Profit and Overhead. Let’s add it up. 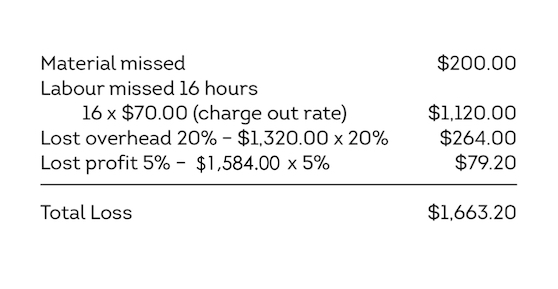 How many jobs will Joe have to do to cover the loss on this job?

Let’s think about what just happened to Joe. He made a small mistake. He missed two light fixtures in his count. Then Joe made another mistake. He didn’t have someone else check his work.

Whether you do your estimates by hand or using software, we’re only human and we make mistakes. When estimating an electrical job, even small mistakes can add up to big losses. Check your work and have it checked by someone else.

Suderman Estimating Systems Inc. has taught the art, science and math of electrical estimating to over 4500 people across Canada. Our courses are Gold Seal Accredited by the Canadian Construction Association. John F. Wiesel has been estimating and teaching estimating since the early 1980’s. Dan Beresford joined the navy in 1977 as an electrician and has worked in various roles in business and the electrical field since leaving the navy in 1989. To learn more, go to www.sudermanestimating.com.

This article—along with other great content—appears in the April 2020 edition of Electrical Business Magazine.

* SPECIAL thanks to Doug M. for pointing out a typo in the original Table (uploaded here May 8). We have corrected and uploaded a new Table here (May 20), and will run a Correction in the upcoming June 2020 edition of Electrical Business Magazine.