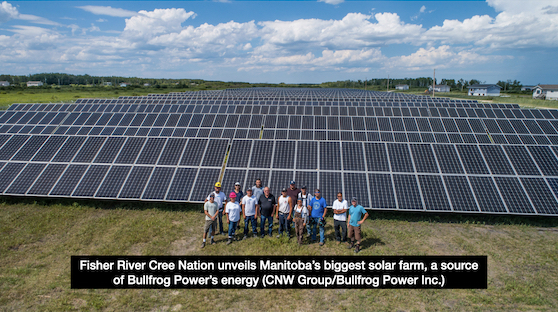 “This solar project is a source of empowerment and pride for our community,” said Fisher River Cree Nation Chief David Crate. “In addition to generating revenue and training local workers in solar installation, we’re also starting a conversation about large-scale green energy.”

The Fisher River community funded the nearly $2.4-million project with its own money, along with $1 million in support from Western Economic Diversification Canada. Fisher River Cree Nation also thanks its partners W Dusk Energy, Bullfrog Power, Solvest and the Royal Bank of Canada.

“We’re trying to create a new standard for our communities,” Isaac said. “People are more enlightened about self-sufficiency and decentralized energy, and Fisher River is right at the leading edge of that.” Isaac also noted that the Fisher River solar farm could become a blueprint for other First Nations looking to generate renewable power.