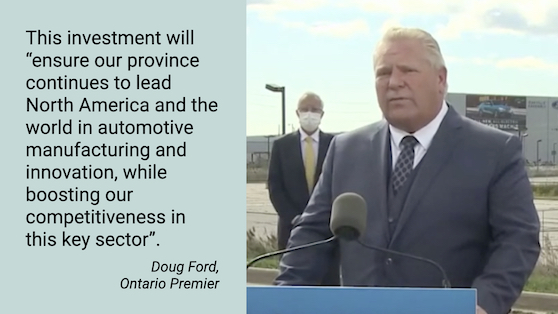 October 16, 2020 – Based on the collective agreement ratified by its employees at the end of September, Ford Motor of Canada says it will transform its Oakville Assembly Complex in Ontario from an internal combustion engine site to also become a BEV (battery electric vehicle) manufacturing facility starting in 2024 (as well as introduce a new engine program at its Windsor, Ont., operations).

The automaker says this “new, globally competitive national labour agreement” establishes Ford as the first automotive manufacturer in Canada to build fully battery electric vehicles as part of a $1.8-billion investment (which includes approx. $600 million from the federal and provincial governments).

Ontario’s premier, Doug Ford, believes this investment will “ensure our province continues to lead North America and the world in automotive manufacturing and innovation, while boosting our competitiveness in this key sector”.