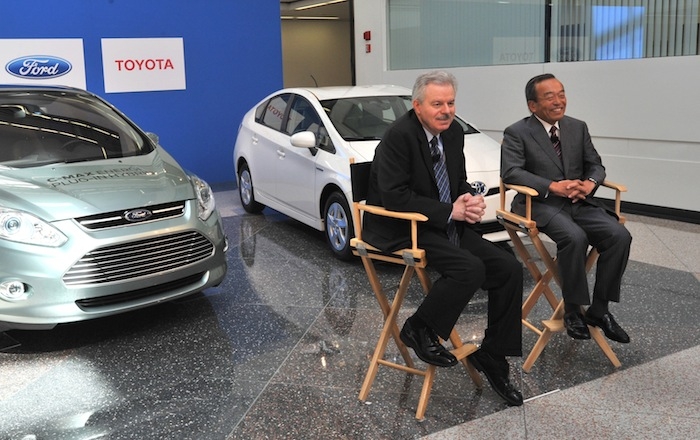 August 26, 2011 – Ford and Toyota have teamed up to develop an “advanced new hybrid system” for light truck and SUV customers and have signed a memorandum of understanding (MOU) on the product development collaboration, with the formal agreement expected by next year, they said.

The two automakers say this new hybrid powertrain will bring the full hybrid experience of greater fuel efficiency to a new group of truck and SUV customers without compromising the capability they require in their vehicles. Ford and Toyota believe that their collaboration will allow them to bring these hybrid technologies to customers sooner and more affordably than either company could have accomplished alone.

“This agreement brings together the capability of two global leaders in hybrid vehicles and hybrid technology to develop a better solution more quickly and affordably for our customers,” said Derrick Kuzak, Ford group vice president, Global Product Development. “Ford achieved a breakthrough with the Ford Fusion Hybrid, and we intend to do this again for a new group of truck and SUV buyers – customers we know very well.”

Takeshi Uchiyamada, Toyota executive vice president, Research & Development, said: “In 1997, we launched the first-generation Prius, the world’s first mass-produced gasoline-electric hybrid. Since then, we have sold about 3.3 million hybrid vehicles. We expect to create exciting technologies that benefit society with Ford – and we can do so through the experience the two companies have in hybrid technology.”

Under the MOU agreement, the two companies will “bring the best of their independently developed hybrid powertrain technology and knowledge to a new co-developed hybrid system, which will be used in rear-wheel-drive light trucks arriving later this decade.”

“By working together, we will be able to serve our customers with the very best affordable, advanced powertrains, delivering even better fuel economy,” said Ford president and CEO Alan Mulally. “This is the kind of collaborative effort that is required to address the big global challenges of energy independence and environmental sustainability.”

Toyota president Akio Toyoda added: “Toyota is extremely proud to join Ford in developing a hybrid system for pickup trucks and SUVs. By building a global, long-term relationship with Ford, our desire is to be able to continue to provide people in America automobiles that exceed their expectations.”

This rear-wheel-drive hybrid system will be based on an all-new architecture to deliver the capability truck and SUV customers demand while providing greater fuel economy, they added. Next on the agenda, the automakers are set to collaborate on developing next-generation standards for in-car telematics and Internet-based services.