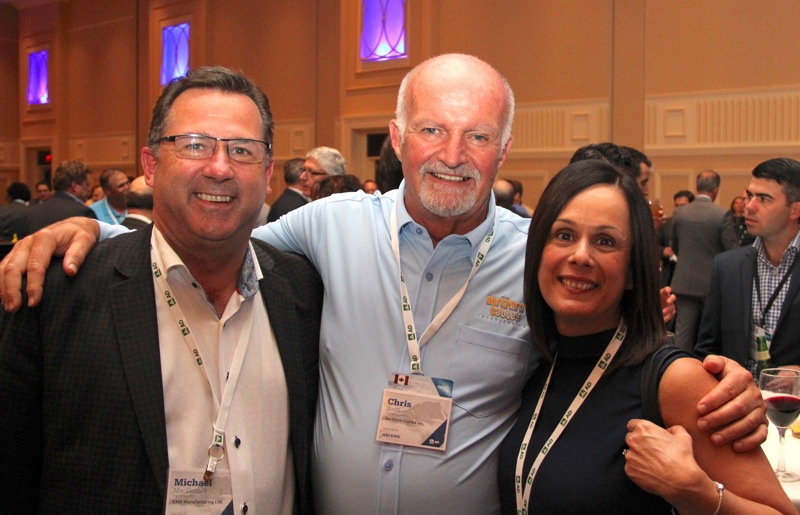 October 24, 2016 – EBMag had a great time last week in National Harbor, Maryland, at the annual North American Meeting of Affiliated Distributors’ Electrical Supply Division (NAM ESD), where both AD distributors and suppliers gather to talk shop and business, and—just as importantly—catch up with one another, and with Electrical Business Magazine.

The meeting is punctuated by a few key items on our agenda, including the keynote luncheon address by AD’s CEO, Bill Weisberg, who remarked, “AD marks 35 years [this year], and it started with vision and courage”.

With over 3800 branches from 550+ independently owned members, AD says it is North America’s largest marketing/buying group for construction and industrial supplies. It has achieved annual sales of $32 billion US across three countries and seven industries… “and it all started with Electrical,” Weisberg reminded.

NOTE: The gallery below contains photos from the First Timers’ Reception, Welcome Reception, Keynote Address and Spirit of Independence Awards dinner. (There may also be one or two shots from the Sports Bar. More text follows gallery.)

A personal highlight for me is the Spirit of Independence awards dinner, which recognizes distributors and suppliers across several categories (e.g. Performance, Annual Planning, Marketing Excellence, MVP, Giving Back, etc.). We are a small nation, so it’s nice to see suppliers and distributors recognized in dedicated Canadian categories, but it’s also great when a Canadian team takes honours in a category open to everyone, such as Philips Lighting Canada, which grabbed the award for Marketing Excellence this year.
Advertisement

DID WE SHOOT YOU? Want a copy? Email acapkun@annexweb.com .

CLICK HERE for all our Canadian 2016 Spirit of Independence Award winners. Congratulations to all of you, including the Second and First Runners-up!

The North American Meeting is truly a great place for bumping into people and hearing news I may not have heard otherwise. For example, Bird Stairs has opened a few new branches; not surprising, considering the massive growth they’ve seen since last year.

And the folks at Northern Cables were showing off a new power and control cable (launching that week!), Type ACIC, for smart buildings, which allows control circuits to be placed in a cable alongside light or power circuits.

We also got some more information on the acquisition of Royal Building Products by Westlake Chemical, and a new product series from Ilsco stemming from its recent acquisition of Surge Suppression Inc.: Surgency surge protective devices (SPDs) for commercial, industrial and residential applications.

Thanks to all of you for sharing your stories!

Next year’s NAM ESD returns to the Gaylord Texan Resort in Grapevine, right outside Dallas, September 25-27, 2017.

A special thanks to all the AD Canada and AD folks who always make the meeting so enjoyable and productive. You know who you are!

— Photos A. Capkun. See yourself in here? Want a copy? Email acapkun@annexweb.com •