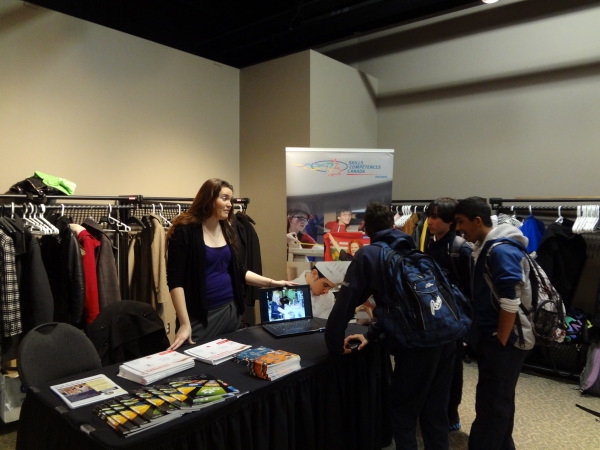 November 1, 2011 – EBMag’s associate editor, Alyssa Dalton, was in Ottawa this morning for the exclusive launch of National Skilled Trades and Technology Week 2011, hosted by Skills/Compétences Canada (S/CC) and Canadian Council of Technicians and Technologists. The event marked the kick-off to a series of activities taking place from October 31 to November 6 across Canada under this year’s umbrella theme–energy, which according to Skills Canada, underscores the important role of building sustainable energy workforce to meet the needs of industry and future generations.

Here are photos from the launch ceremony (which concluded with an exploding balloon lit by a flaming torch!); the model wind turbine competition where teams from five local Ottawa schools competed against each other; Adrian Schut, winner of the WorldSkills London 2011 Medal of Excellence in Mobile Robotics (partner Benjamin Church absent); and a 28-ft model wind turbine by Edey FX built by Algonquin College students. The Canada Museum of Science and Technology served as the backdrop for the event. (Photos A. Dalton)