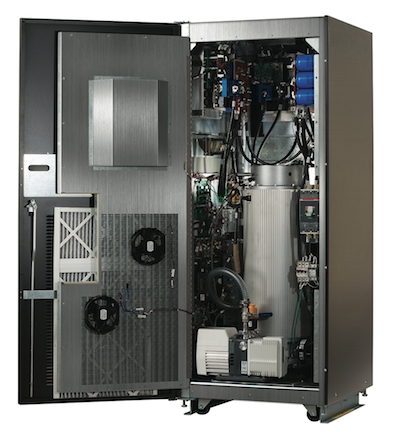 November 29, 2016 – GE has unveiled a new series of flywheel uninterruptible power supply (UPS) systems with a range of 50 to 1000 kilovolt-amperes and which integrates patented flywheel technology from Vycon, a subsidiary of Calnetix Technologies, with GE’s TLE series and SG series solutions.

A flywheel UPS system stores kinetic energy in the form of a spinning disk and is designed for short-time discharge applications, GE notes. The Vycon flywheel incorporates a high-speed motor generator and five-axis active permanent magnetic bearings to levitate and sustain the rotor. The fully sealed, frictionless bearings require no lubrication and little to no maintenance, GE adds. Additionally, it says its flywheel UPS can be operated in extreme temperatures.

Frank DeLattre, president of Vycon, says the company has deployed more than 1200 of these systems worldwide with a total of over 16 million discharge cycles.