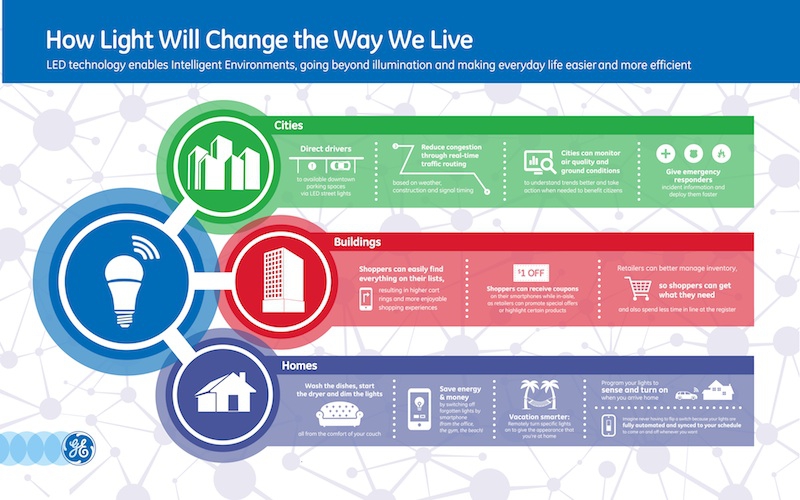 May 26, 2015 – GE has announced plans to engineer colour-changing LED lighting that is compatible with Apple’s HomeKit, recently unveiling its LED-enabled Intelligent Environments capabilities for cities, buildings and homes.

“Lighting is how many first experiment with the idea of a smart home, and our insights show that consumers want the ability to control lighting from anywhere, automate lighting and pair lighting with other devices—like sensors, thermostats and door locks,” said Beth Comstock, president & CEO of GE Business Innovations.

Embedded with GE Align technology, GE’s HomeKit-enabled LED bulb gives consumers the ability to automate lighting according to the body’s natural sleep circadian rhythm. Align tunes the light spectrum to help promote the body’s natural sleep cycle by controlling the blue concentration of light output. In the morning, Align produces a bright, bluer tone that suppresses the body’s production of melatonin, and in the evening it produces an amber light.

• Individual device control and grouping devices into scenes all under one command,
• Interoperability and integration with other connected devices,
• Pairing through authentication and end-to-end encryption between GE intelligent LED and iPhone, iPad, or iPod touch.

GE said its Homekit-enabled LED offering will be available later this year.