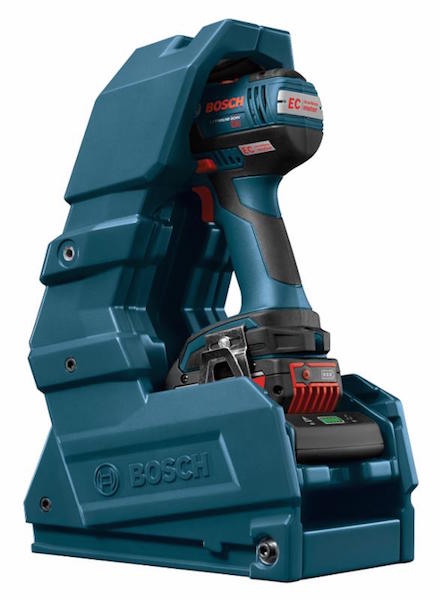 November 14, 2014 – Bosch Tool’s new Bosch Power Ready wireless charging system promises a system that powers tools virtually anywhere, with the battery either on the tool or off.

Components of the new platform include the WCBAT612 SlimPack 18V 2.0 Ah battery, WC18C wireless charger, WC18F frame for surface mounting and WC18H mobile holster. The new platform works off the concept of contactless energy transfer (a.k.a. inductive charging). When the charger is plugged in and the compatible battery is placed upon it, the charger begins wirelessly transmitting an alternating magnetic field. The battery, featuring an internal copper coil, acts as a receiver. As the alternating magnetic field penetrates the coil, voltage is induced and a charging current flows to the cells until full. Each charger also features foreign object detection, which detects when any other object besides the compatible battery is on the charging pad. When sensed, the charger will not turn On until the object is removed.