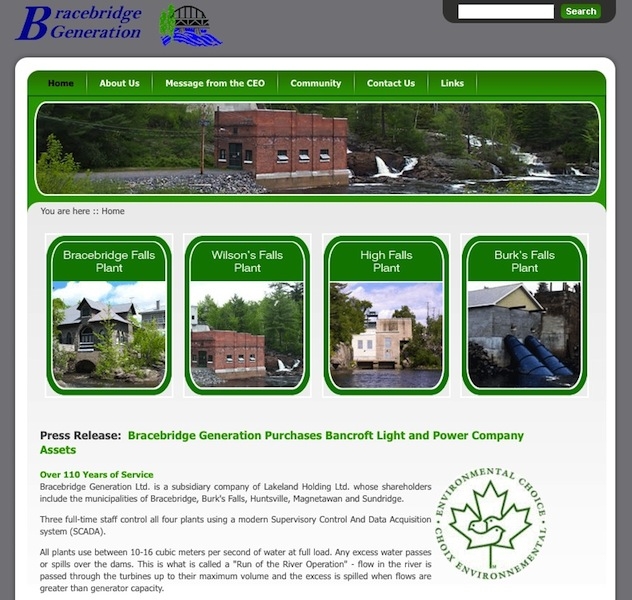 May 3, 2013 – The Ontario Waterpower Association (OWA) yesterday congratulated Bracebridge Generation Ltd. on the completion of upgrades to the Wilson’s Falls and Bracebridge Falls generating stations.

“Waterpower is the electricity source upon which the original prosperity of this province was built,” said Paul Norris, OWA president. “These developments are a great example of the opportunities that exist across the province to expand the contribution of waterpower to provide economic, environmental and energy benefits for present and future generations.”

The upgrades took a year to complete and, according to OWA, contributed $5 million to the local economy through labour and material costs during construction. Additionally, the manufacturing of the two new generators, civil construction and all engineering were completed by Ontario firms.

Bracebridge Generation is a subsidiary of Lakeland Holding, which is owned by the municipalities of Bracebridge, Huntsville, Burk’s Falls Sundridge and Magnetawan. The re-opening of the two facilities will be Ontario’s first two Hydroelectric Contract Initiatives (HCI) to come to fruition, says OWA.

“We would not have been able to complete these upgrades without HCI contracts, which provided us with investment certainty,” said Chris Litschko, president and CEO of Bracebridge Generation, adding that OWA “deserves a lot of credit for representing the needs of its members who will be able to generate and grow under a variety of long-term contracts”.