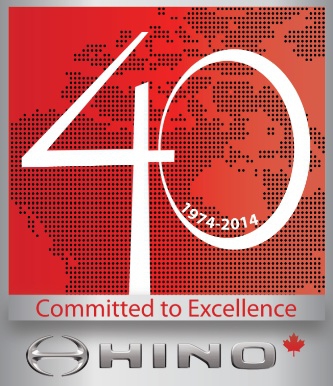 May 20, 2014 – Hino Motors Canada has announced it is celebrating 40 years of service in Canada. Originally based in Burnaby, B.C., the company imported and assembled the first Hino trucks to arrive in North America.

“From humble beginnings in 1974 to the prominent Canadian manufacturer of Class 4 – 7 trucks it is today, Hino is proud to celebrate its 40th year in Canada,” said Eric Smith, vice president of Sales. “Today the company is well entrenched within the Canadian marketplace with a coast-to-coast network of 47 dealers, a Canadian assembly plant in Woodstock, Ont., and its head office and Parts Distribution Centre located in Mississauga, Ont. The next 40 years for Hino promise to be very interesting and exciting.”

Hino Canada is planning to celebrate its milestone later this year at a gala event involving customers, dealers, suppliers and special guests. At the event, the company will showcase its new Mississauga head office, Parts Distribution Centre and National Training Centre. From its new and much larger office, Hino said it will be better positioned to implement its “Total Support philosophy with the finest products, services and parts availability for Canadian customers”.