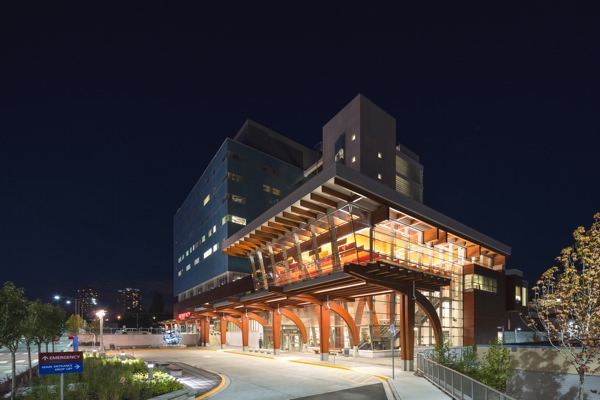 October 11, 2016 – There was nothing simple or easy about the work behind Surrey Memorial Hospital’s expanded emergency department and new, eight-storey Critical Care Tower, which are highly integrated with both the existing site and new systems. To top it off, time was tight.

“By the time we started, we were already behind schedule,” says Michael Graham of MMM Group’s Vancouver office, one of the contractors who partnered for the electrical work on the project. “And you cannot be late. There are serious implications if you are late with hospital builds.”

Construction kicked off at the onset of 2011. The emergency department was operating by October 2013 and the entire new addition was officially opened June 2014—right on schedule.

“To have that one department open earlier, that meant we had to have many aspects of the entire building already complete,” adds Graham, who served as senior project manager and senior lighting designer.

“We had to construct this building and not have any impact on the existing hospital in any way,” says Brett Pybus, another senior project manager with MMM Group. “We were tying a multitude of services back into the existing building but we could not compromise its operations. That was quite a significant challenge, with up to 30 electrical systems—fire alarm, power quality, security—running, so it was very complicated.”

From the mechanical and data system installations to working within the energy efficiency plans as part of BC Hydro’s New Construction Program, you can see how the pressure was on.

No “one fit for all” in lighting

This wasn’t just a typical hospital addition. The $512-million expansion includes a lecture hall-like theatre for the University of British Columbia’s medical school at the basement level and the Critical Care Tower includes three parkade levels, a mechanical level and a helipad, in addition to all the acute care and neonatal unit rooms and B.C.’s first Ronald McDonald Family Room.

This also meant a “one fit for all” approach to lighting wasn’t going to cut it.

“We used a wide, wide range of lighting manufacturers,” Graham says. “There were about 12,000 lights, if I recall… We had patient rooms with multi-dome lighting, trauma care lighting in emerg, and architectural lighting in the common area to highlight the wood design.”

LEDs were used, but not predominately, as they weren’t as cost-effective in 2011 as they are now, Graham says. “We have a lot of small, lower-wattage LEDs in patient rooms but everywhere else we put fluorescent, and metal halide on the exterior.”

“The other part of it is the availability of highly efficient luminaires that would be appropriate for this application were still being developed,” Pybus adds. “Today, if we went out on the market, we would have a lot more options.”

Control with patients and staff

Despite a lack of LEDs, Surrey Memorial’s addition was bestowed LEED Gold status, many thanks to a detailed lighting control system based on occupancy and need.

Non-patient rooms have stand-alone occupancy control and a simple relay system running in the common rooms. There are controls for the small LEDs by the patient beds—which are integrated with the Nurse Call system—as well as controls for the multi-dome lighting for the family room, separated from the patients by a curtain.

“We’re trying to hand over to the patient the ability to control lighting within their particular zone,” Pybus says. “We have to keep that quite simple as it’s acute care so the patients in here are really sick.”

The lighting controls are a custom diurnal system, developed by MMM Group with Ellis Don.
“We’re incrementally changing light to try and mimic daylight, but without the frequency changes,” Pybus notes.

Similar to circadian rhythm, the system allows staff to ‘join’ or ‘leave’ this cycle via a wall keypad. Otherwise, 3500K is the standard light temperature throughout the hospital.

Graham says the team spent a lot of time on the lighting controls in the NICU (neonatal intensive care unit), where it was particularly challenging as they considered varying studies to learn which light was least damaging to infants’ eyes. Here, they had to use custom software and technologies and install an emergency shut-off just for the lights.

With a little BC Hydro help…

“Adding more space—plus even more state-of-the-art equipment and systems—was going to increase how much energy the hospital consumed, no matter what,” says Robert Bradley, energy conservation manager for Fraser Health. “Investing in energy efficiency was a high priority to avoid added energy costs.”

With the help of the New Construction Project program from BC Hydro, designers compared various models of heating and cooling to see which was most energy efficient. The program also helped builders pay for a portion of the costs associated with installing the measures identified in the study.
This included daylight harvesting, increased roof and wall insulation, high-performance air-to-water heat pumps and heat recovery systems that will save more than 2 million kWh of electricity a year, according to BC Hydro. Additionally, all motors larger than 7.5 hp were required to have a variable frequency drive.

Cooling towers are not being used, Graham adds, for affection control reasons.

“When we looked at energy costs, this building was about 55% cheaper than in comparison to a reference building,” Pybus says.

“It’s the integration of so many different systems—30 systems into three or four networks—that makes this project unique and technologically advanced,” Graham says. “Today, there would be even more.”

Integrating the intrusion, panic and CCTV systems with software pop-ups allows onsite security to monitor and respond to emergencies, Houle explains, and combining cellphones, pagers and eComm radios on the DAS keeps everyone in constant contact during regular work or in times of emergency. The RTLS system not only allows staff to keep track of wandering patients, but also serves for asset tagging.

“These systems were where we had one the most revisions compared to other buildings,” Pybus says. “All of the communications and IT technologies and audio-visual each have the capability to provide information to each other and optimize the effort of the staff relative to the patient’s needs and the environment they’re working in.”

The wireless system was the most challenging, he adds, and devices had to be moved a number of times to get proper coverage and mapping, all while staying out of the way of staff and patients.

“Everything is tied into a computer somehow,” Houle notes, meaning all the medical equipment used by the doctors and nurses needs computers—even the phones are IP-based. Installing the data system began with establishing a fiber and copper connection between the existing campus and the new tower. Next, Houle built a fiber backbone network and horizontal Cat6 cable network throughout the new tower.

“The data system will be a huge benefit for the hospital as the medical staff will be able to transfer information from patients faster than before,” Houle writes in a report. “In a hospital setting, seconds can be critical.”

A high amount of detail was needed in devising the installation schedule, according to Houle, because of the level of integration.

Where possible, Houle “prewired, programmed and installed the head-end controllers before field devices, which helped reduce installation and commissioning time on all systems”.

The company says it also worked with MMM Group to identify any prefab items required, and had them built in its own work area. “All systems were pre-integrated in our office before deployment in the field to remove any programming issues that may have arisen while commissioning,” Houle says.

Another challenge was space, adds Houle, which was tasked with placing all conduit in the ceiling while still allowing access for the mechanical installations. “The hallways in a hospital are also quite full, so having everything in its proper place while avoiding conflicts with other trades took coordination.”

If it wasn’t for the teamwork, Surrey Memorial wouldn’t have made its deadline, Graham notes.

“One of our best lessons learned from the Surrey Memorial Hospital project was to never overlook the true value of great collaborative teamwork… and not just your company’s team, but the entire project team,” says Brian Aasman, general superintendent with Houle, Burnaby. “If one part of the team fails in any way, then the entire team fails and the project is compromised, so you have to work not just to support your immediate team members, but anyone involved in the project who may encounter problems.”

“So kudos to the contractors and builders and health authority for really working together to make this happen so successfully and on time,” Graham adds.