Features Articles
How contractors can corner the market on electric heat 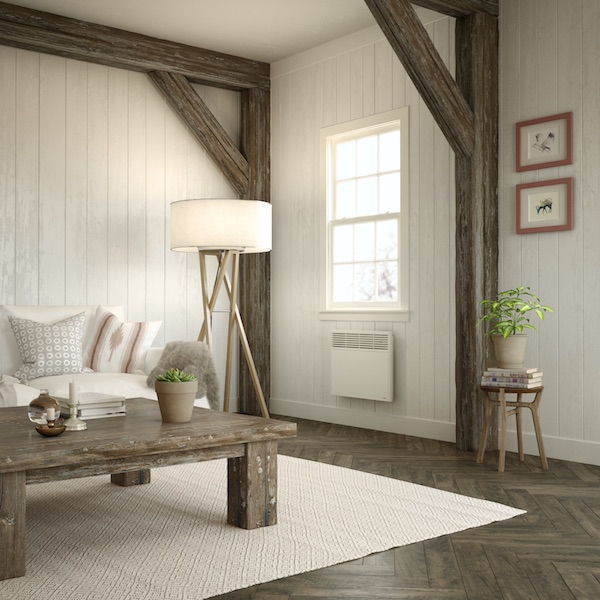 February 13, 2018 — “Is your head in the sand?” asked Scott W. in a Letter to the Editor regarding the article, “The 5 shades of green of electric heat,” published in EBMag’s January 2017 issue. That article argued consumers should make the switch to electric heat systems. But Scott wrote:

Everyone in Ontario who has electric heat wishes they did not. The costs to operate an electric heating system are astronomical, and are only going to increase dramatically over the next few years.

We felt compelled to take a second look at electric heating and whether a stronger case could be made for it, especially when taking into account high electricity prices.

What are Canadians using to stay warm?

Winter in Canada means not only snow but increased energy consumption to heat homes and buildings. Choosing the right energy source depends on both a province’s climate and its electricity rates.

Statistics suggest that electric heat is not the most popular or accessible form of heating across Canada. According to a report from StatsCan, 37% of households used electricity as their main heating fuel in 2007.1

Provincially, 61% of households in Quebec used an electric baseboard heating system, compared to 47%in Newfoundland & Labrador, 25% in New Brunswick and 22% in Nova Scotia.2

Meanwhile, forced-air furnaces were used in 85% of households in the Prairies, 76% in Ontario and 56% in British Columbia.3

In 2011, electricity was used to heat 39% of Canadians’ homes. While furnaces were still the main heating source in Ontario and the Prairie provinces, 66% of households used electric baseboards in Quebec, 56% in Newfoundland & Labrador, and 48% in New Brunswick.4

Based on these statistics, the number of Canadian households using electric heat systems has increased overall, but this evidently varies drastically by province; and we need to keep in mind these statistics do not include commercial buildings.

According to a 2017 report from NRCan (Natural Resources Canada), natural gas/propane accounted for 64% of the total share of energy consumed for space heating (in both residential and commercial buildings), while electricity accounted for 18%.5 NRCan reports:

The commercial space-heating market, when compared to the residential market, is dominated by much lower energy performance levels.

This results largely from the occupant model used in commercial buildings, which creates a disincentive for building owners to invest in higher-efficiency equipment as cost savings would accrue for the occupant.

The electric heating market is about 60% on the residential side, including condominiums, and 40% on the commercial side, says Stéphane Lettre, strategic marketing director at Stelpro.

While these statistics might lead you to write-off electric heating systems—particularly if you live in Ontario or the Prairies—there are still instances in which it can be cost-effective and beneficial.

According to The Pan-Canadian Framework on Clean Growth & Climate Change, the federal, provincial and territorial governments’ longterm goal is that all space heating technologies for sale in Canada meet an energy performance of more than 100% by 2035.6 As electric heating systems are 100% efficient, it’s likely these systems will become more popular in the coming years.

Consequently, the question becomes how can you, an electrical contractor, corner the electric heating market and get ahead of the curve?

Before we explore the applications in which electric heating can be valuable and how to attract customers in this market, it’s important to address the elephant in the room: high electricity rates.

In provinces such as Quebec and Manitoba—where electricity rates are much more favourable—there is a higher demand for electric heating systems, particularly electric baseboards and heat pumps.

“Quebec is obviously the dominant market for electric heat in Canada with its low kWh rate,” says Lettre.

Hydro Quebec offers a residential rate of $0.4064 per day plus $0.0582/kWh for energy consumption up to 33 kWh, multiplied by the number of days in the consumption period. When a residence consumes more than 33 kWh, Hydro Quebec charges $0.0892/kWh.7

As a result of the high electricity prices in Ontario, electric heat is under attack in the province.

However, Lettre believes this attack is unnecessary “since, in a lot of cases, the operation cost could be greatly reduced through the use of better electronic controls and more efficient heating units in certain applications”.

Additionally, gas is not even available in some Ontario regions, particularly in the north, notes Isabelle Marcil, communications coordinator at Flextherm, in an email. “In those cases, electric heating is a smart choice compared to other possible heating systems,” she writes.

The biggest advancement in electric heating efficiency has come from the development of electronic thermostats, Lettre says. “They provide energy savings of up to 25% compared to mechanical models, through much-improved sensing and management.”

A typical mechanical thermostat can vary ± 2ºC, while an electronic unit will only vary ± 0.5ºC.

Systems using mechanical thermostats are “sometimes nicknamed ‘saw tooth’,” says Doris Lachance, product manager, Ouellet, “because the heat output, if graphed, would resemble a set of sharp peaks and valleys rather than a smooth line: the heater works uninterrupted to above the upper setting, then stops and the room cools to below the lower setting, then the cycle begins again”.

In contrast, an electronic thermostat reads the room temperature 240 times per hour, Lachance explains, which enables it to maintain a more uniform temperature. This leads to increased energy and cost savings.

“Hydro Quebec estimates that electronic thermostats deliver savings up to 10% on annual heating costs over their mechanical counterparts,” she elaborates. “Still, according to Hydro Quebec, you can save an additional 4.5% by using programmable thermostats and setting them to lower the temperature by 3ºC at night and when you are at work.”

The new generation of smart thermostats can also increase energy savings through built-in features like geofencing, which automatically detects whether someone is home.

When it comes to attracting customers in the electric heat market, installing the most-efficient electronic control possible is an important tool contractors have at their disposal.

As such, offering smart electronic thermostats will help you sell more while also helping clients achieve the greatest energy and cost savings.

Cornering the electric heat market also requires choosing the right unit for the application, with the appropriate output, says Lettre.

“If you put a baseboard heater or something to that effect in the bathroom, you’ll pretty much need to heat the bathroom constantly to make sure you have the right temperature when you shower, let’s say,” he elaborates. “Whereas a bathroom fan heater […] has a boost mode, so it’ll jack up the temperature and you’ll feel the temperature rise within a matter of seconds.”

Electrical units can also be used as a backup for mini-split heat pumps, which take the outside air and heat it through an outdoor condenser and an indoor air-handling unit.

“Anytime you have a mini-split set up, a central set up or what not, it’s almost impossible that every single room will be heated to the appropriate level,” Lettre explains. “So you might have a north-facing room, an area that’s not well-insulated or more susceptible to drafts, that might need supplemental heating.”

Contractors must also ensure there is proper output for the size of the room when installing electric heating systems. The basic calculation for determining proper output is 10W/sf. According to Lettre, an underpowered unit might cost less upon purchase, but will cost more in operation.

“If you put in a 750W unit, it will function at a higher capacity for more time just to keep up the temperature because it’s not powerful enough to really properly heat the whole room,” he explains.

Regardless of the improvements in electronic thermostats and the tools available to contractors, you may still be thinking there isn’t a strong market for electric heating systems, thanks to high electricity prices.

As noted above, the electricity rates for each province/region plays an important role in the popularity of these solutions. Consequently, when selling and installing electric heat solutions, you must take this into account and plan accordingly.

In provinces with higher electricity rates, offering an electric heat system as a secondary heat source or in retrofits is more likely to be successful.

“Electric heating, I believe, in places like Ontario and Alberta, is often used as a secondary source of heating and also in retrofits,” Lachance says. “It’s really easy to install and you don’t need to go through the walls and ceiling to go with the duct vent… We see demand in that.”

Rooms cannot be zoned in houses with central heating, so the temperature may not be comfortable or uniform in each room. In those cases, installing electric baseboard heaters or convectors can balance out this issue.

Additionally, according to Marcil, there are a number of situations in which electric floor heating can be beneficial, such as in garages, warehouses and plants, where doors are constantly opening and closing.

“While hot air from forced-air systems may escape through doors and windows, radiant heat remains stored in the floor’s structure and heat keeps on radiating from the elements in the room,” she explains.

Floor heating is also useful in daycare centres or hospitals because there are no moveable parts, she adds.

“Every party needs to understand what the energy savings out there are and how to achieve them,” Lettre says.

This article originally appeared in the January 2018 issue of Electrical Business Magazine.