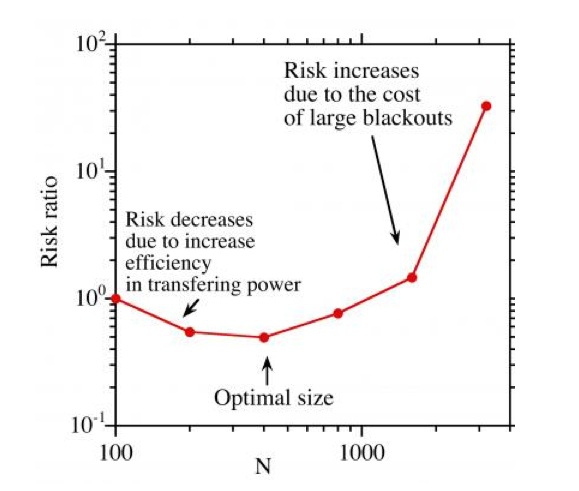 April 9, 2014 – David Newman, a physicist at the University of Alaska, believes that smaller power grids would reduce the likelihood of severe outages, such as the 2003 Northeast blackout that cut power to 50 million people in Canada and the United States. He and co-authors Benjamin Carreras (BACV Solutions) and Ian Dobson (Iowa State University) make their case in the journal Chaos.

Their investigation began 20 years ago, when Newman and Carreras studied why stable fusion plasmas turned unstable so quickly. They modelled the problem by comparing the plasma to a sandpile.

“Sandpiles are stable until you get to a certain height. Then you add one more grain and the whole thing starts to avalanche,” explained Newman. While discussing a blackout, Newman and Carreras realized their sandpile model might help explain grid behaviour.

North America has three power grids; interconnected systems that transmit electricity from power plants to consumers. Each grid is huge, say the researchers, because the more power plants and powerlines in a grid, the better it can even out local variations in the supply and demand, or respond should some part of the grid go down. However, large grids are vulnerable to possibility of a grid-wide blackout like the one in 2003.

“The problem is that grids run close to the edge of their capacity because of economic pressures. Electric companies want to maximize profits, so they don’t invest in more equipment than they need,” Newman said.

On a hot days, when everyone’s air conditioners are on, the grid runs near capacity. Should a tree branch knock down a powerline, the grid is usually resilient enough to distribute extra power and make up the difference. But when the grid is already near its critical point and has no extra capacity, there is a small but significant chance it can collapse—like a sandpile.

This vulnerability to cascading events comes from the fact the grid’s complexity evolved over time, reflecting tension between economic pressures and government regulations to ensure reliability, note the researchers.