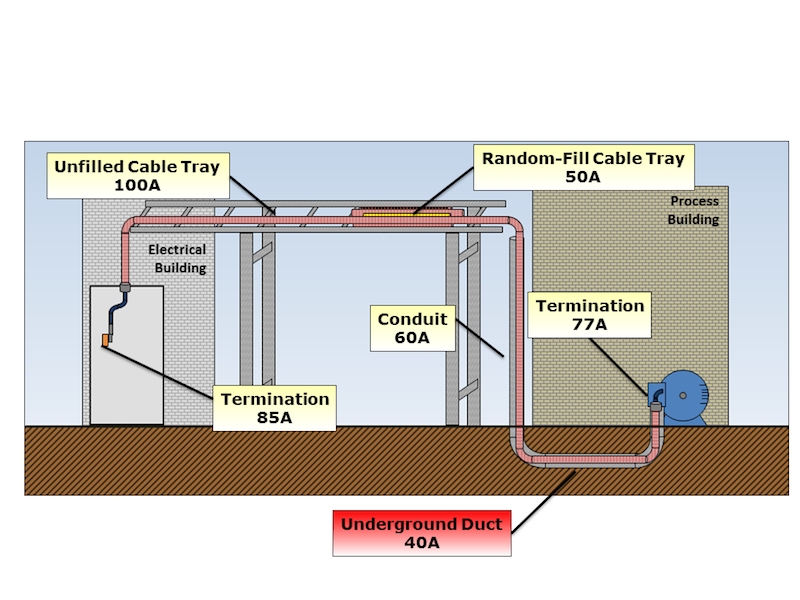 November 30, 2018 – The current-carrying capacity of a cable, better known as its ampacity, is a value from the code table, right? Select a cable, select a table, and off you go. What is often overlooked, however, is that the ampacity given for a cable is actually governed by heat flow.

Indeed, conductor ampacity is based on the dynamics of temperature, rather than being definable as an inherent property of a given size of cable. How the heat is generated and managed around an operating cable dictates how much current can be carried by that cable.

This is why the installation codes—including the CE Code and the National Electrical Code (NEC)—have de-rating factors for certain situations, such as a random-fill tray, or have entirely separate tables for other situations, such as underground ducts.

Underlying issues
It is important to select an appropriate size of cable based on both the required current and the way in which the cable will be installed. Undersizing or oversizing the cable will have negative consequences, such as insulation failure or increased costs. Yet, electrical contractors commonly apply the aforementioned codes’ tables without an understanding of the underlying reasons behind them and their associated adjustment factors.

Heat is generated in a cable and its components while the cable is energized. As this heat is then conveyed away from the cable, the amount of heat being generated will reach an equilibrium point with the amount being dissipated.

In any typical industrial or commercial installation, the amount of heat generated in the cable is largely dependent on (a) the level of current flowing through it and (b) the size of the cable (i.e. a larger cable means less resistance and, hence, less heat generated), while the rate at which the generated heat is conveyed away from the conductor will depend on the specifics of the cable installation.

Accordingly, it is very important to discuss the concept of ‘installation conditions.’ This term refers both to the physical surroundings for an installed conductor, such as free air, cable tray, conduit or underground duct, and to the ambient characteristics of that installation as applicable, including ambient air temperature, ground temperature, moisture content and/or exposure to sunlight. Such factors help determine how heat is (a) contained near or (b) conveyed away from an operating conductor.

Limited by insulation
Since insulation is the part of the cable directly damaged by excessive heat, it is the limiting factor in terms of maximum temperatures. The common 75 and 90 C ratings used in reference to cables are based on insulation. Each type of insulation used in cables—such as whether cross-linked polyethylene (XLPE), ethylene propylene rubber (EPR) or polyvinyl chloride (PVC)—has a specific temperature limit rating that must be considered.

In addition to possibly reducing the decades-long useful life of a cable by several years, this process of degradation may also weaken the insulation enough so as to compromise the cable’s performance during a fault.

In any such case, the overheating does not need to occur all along the entire cable run. Even a short portion of a run in a thermally poor environment may result in a cable failure as the insulation in that area degrades.

It is helpful, then, to consider the typical conditions encountered in an industrial or commercial installation, in the context of heat flow, retention and transmission, to gain a more qualitative understanding of ampacity in each situation.

Free air
In principle, a cable in free air is subject to three types of heat transference: (a) convection, whereby heat from the cable warms the surrounding air, rises and is replaced by cooler air from below, thus continuously carrying heat away from the cable; (b) conduction, which carries heat from the copper through the insulation to the surface of the cable, as well as away from the cable through the support structure (regardless of the type of support); and (c) radiative heat energy, which is absorbed by the cable jacket from external sources, such as sunlight or nearby hot process equipment.

In practice, the dominant method of heat transference will be convection, which is extremely efficient in free air. Substantial air movement will result in higher cable ampacity. In fact, of all the installation conditions examined here, free air can be considered the best or ideal case.

Convection does act to remove this heat, but can only do so after the heat migrates to the exterior edge of the cable mass. Also, the other cables in a tray present additional heat sources, depending on cable loading and load sparing. Thus, the total temperature of the conductors in the tray rises significantly, compared to a single cable in a tray or in free air.

Further, if a tray cover is installed, it will trap a layer of unmoving air above the cables, which will then act as an insulator, further exacerbating the heat effects in the tray.

Conduit
A conduit also serves to restrict the movement of air. And as the unmoving air is trapped and confined, it will act as a very effective insulator, similar to how double-paned windows work. As a result, the ampacity of a cable run in a conduit will be reduced in comparison to a free air installation.

Buried
A direct-buried cable is surrounded by a fill material, which could be native soil, sand, concrete or a combination of materials. The heat dissipation around the cable will be affected by the temperatures of (a) the fill material and (b) the surrounding air, since the heat will need to be conducted away from the cable, through the fill material and to the surface where it can be dissipated.

The rate at which heat is conveyed through the fill material is also highly dependent on the thermal resistivity of the material (also known as ‘rho’). Dry sand, for example, is a very effective thermal insulator, compared to native soil.

So, the type of fill material and its rho should always be considered. The electrical installation codes use a base rho of 90 to represent the thermal resistivity of average soil. This is often a reasonable assumption when native fill is used, but if a site is known or suspected to have a different soil thermal resistivity, based on its composition, or if the fill material in the immediate vicinity of the cables is imported, then a different rho needs to be used. These cases typically negate the direct use of a code table and require a special calculation to be performed instead.

Thermal resistivity is also substantially affected by the moisture content of the fill material. More moisture will improve the conduction of heat through the soil. For this reason, fill materials that drain easily, such as sand or gravel, may offer very poor thermal properties. Some references for buried lines will call for a lower maximum cable temperature, so as to minimize the risk of drying out the surrounding media.

The deeper a cable is buried, the greater the amount of fill material and, hence, the greater the thermal insulation between the conductor and the air above it. In general, this will reduce the cable’s ampacity, which will need to be considered when planning an installation’s depth.

Where this issue often becomes problematic is when a buried cable must be routed around obstructions, such as beneath a road crossing. If these depths are not accounted for in the original design or if the installation is modified during construction, then the cable could end up in a worse thermal environment than anticipated.

Termination temperature
The electrical equipment connected at either end of a cable is designed and manufactured based on a specific temperature for the conductor within the equipment and at the termination point.

In North America, the equipment standards for the majority of low-voltage (LV) equipment are based on a 75 C conductor ampacity rating, but could be as low as 60 C. Also, the termination temperature is based on the equipment rating, not the lug rating, which may be listed as substantially higher.

Longitudinal heat flow
Copper and aluminum are both excellent conductors of heat and electricity. Within certain limits, a hotter section of cable will tend to thermally equalize with a cooler section. This property, known as longitudinal heat flow, allows a cable run’s short section through a thermally poor environment to be ignored when determining the overall ampacity.

Longitudinal heat flow can be useful when a cable passes through an insulated wall or another small space with severe thermal conditions. The electrical codes provide guidance on the maximum distances that can safely be ignored and they are adequate to address many difficult installation scenarios.

In the example illustrated here (see above image), the power source is a medium-voltage (MV) motor control centre (MCC), set up within a climate-controlled electrical building. Between the source and the load, the cable passes through an unloaded cable tray, a fully loaded, random-filled cable tray, a conduit and an underground duct, reaching its termination point where it is exposed to the full ambient conditions of a non-air-conditioned building.

Electrical contractors who understand temperature limits can anticipate which portions of the cable routing will present the more restricted ampacities, with the underground duct supporting the lowest current capacity.

From theory to application
Ampacity is not simply a line item in a code table, but rather a question of heat flow balance. It is highly dependent on (a) the surroundings of a cable and (b) how effectively heat is conveyed away from that cable. The more generated heat that is retained near the cable, the hotter that cable will operate.

Ampacities listed in tables have been computed based on specific assumptions, which must be reconsidered for their validity in each real-world installation. Being aware of the basis underlying a quoted ampacity value is imperative, so as to avoid misapplying the data and specifying an incorrect cable size.

As shown in the illustrated example, a cable run must be examined in its entirety to find the most restrictive installation conditions, whose ampacity ratings then dictate the current capacity for the entire length. A good understanding of how heat is conveyed in the various installation conditions found in an industrial site will aid in determining which particular case might be the most restrictive.

This understanding will also aid in determining whether any differences between (a) the assumptions in the ampacity reference and (b) the particular installation conditions will call for a change in the plan or additional calculations to properly account for the differences. In time, contractors can develop an intuitive sense of where problems might arise.

Kris Sommerstad is an Edmonton-based senior electrical engineer for WorleyParsons, an international engineering services company. For more information, contact him via email at kris.sommerstad@worleyparsons.com.

This article originally appeared in the October 2018 issue of Electrical Business.