Features Energy & Power Generation
How to improve a biogas plant? With a biobattery, of course! 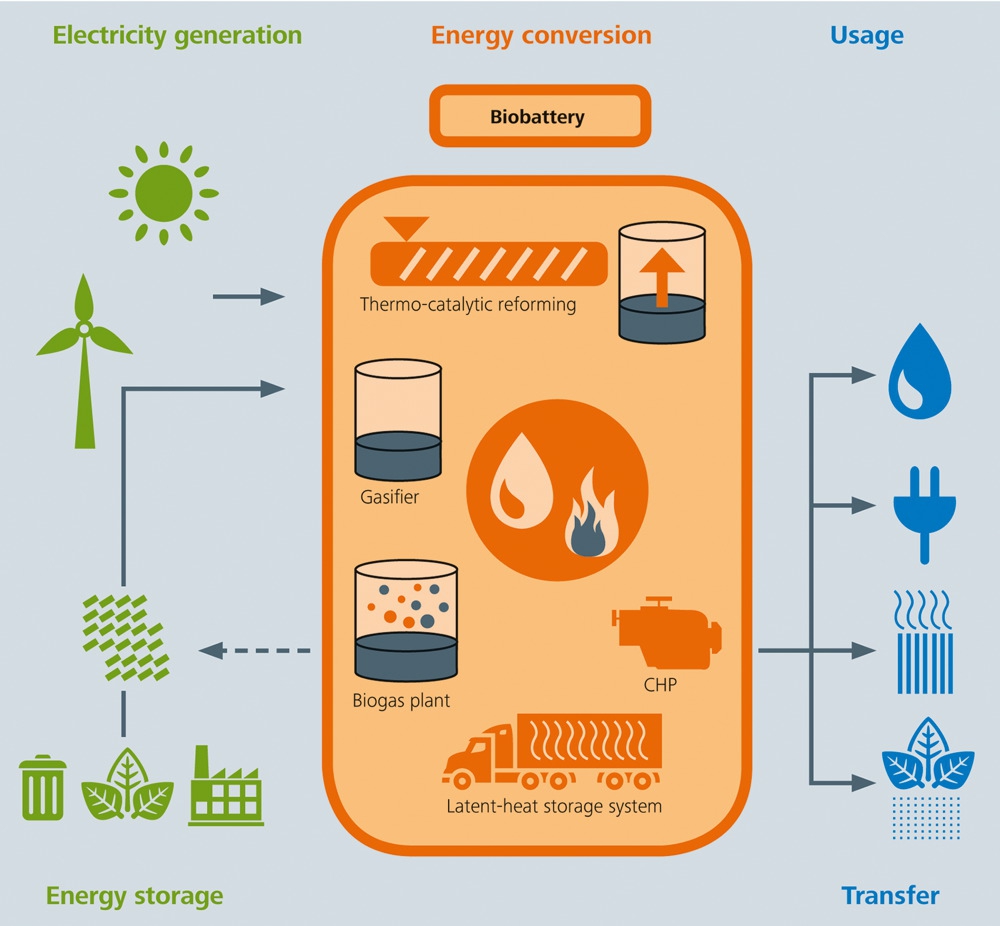 February 27, 2015 – Researchers from the Fraunhofer Institute maintain biogas plants are an important element of decentralized energy supply; they produce electricity from renewable resources and can compensate for fluctuating wind and solar energy. There are already 8000 plants in operation in Germany with a total electrical output of 3.75GW, but they have several disadvantages, too:

… they only process a limited range of organic substances and compete with the cultivation of food plants.

Scientists from Fraunhofer’s Institute for Environmental, Energy and Safety Technology UMSICHT say they have now succeeded in improving the efficiency of biogas plants with their biobattery process, which not only supplies electricity and heat, but also high-quality products such as gas, oil and vegetable carbon. These can be employed as required to produce electricity, for example, or as marine or aviation fuel, as an admixture for fuels or as a fertilizer. When processed further, they even provide basic substances for the chemical industries.

The biobattery is modular and consists of a pool of technologies such as biogas plants, thermal storage, carburetors and engines to produce electricity. The heart of the concept is thermo-catalytic reforming (TCR). With this, the experts convert carbons out of organic material, such as fermentation residues from biogas plants and bioethanol production, industrial biomass waste, sewage sludge, straw, scrap wood or animal excrement. The result: oil, gas and biomass cokes.

“The particular advantage of the biobattery is that we can utilize a number of raw materials which would otherwise have to be disposed of often at great cost,” explained Andreas Hornung, director of UMSICHT at the Institute Branch in Sulzbach-Rosenberg.

Researchers say they are demonstrating this process also works in practice at a pilot plant that utilizes roughly 30 kg of fermentation residues every hour. The raw materials first pass through a sluice without oxygen into a continuously rotating screw. There the material is heated up and broken down into biochar and volatile vapours. The vapours are reheated then cooled again. In the process, it condenses into a liquid that contains biooil and water. Researchers separate the high-quality oil to reuse it. The resulting gas is purified and collected.

The liquid, gaseous and solid products can be reutilized in various ways. The oil can either be processed into marine and aviation fuel or used in a combined heat & power (CHP) plant, as can the gas, to produce electricity and heat. The separated process water contains numerous short-chain biodegradable carbon compounds. It can be fed back into the biogas plant to increase the methane yield. The biochar is ideal as a soil conditioner.

“The plant converts more than 75% of the energy efficiency into high-quality energy sources in a robust, continuous process. The efficacy can be improved even more if mobile latent heat accumulators are used,” explained Hornung.

One particular advantage of the biobattery is that the system can be gradually expanded, say the researchers. “This is very interesting for operators in terms of finance. High investments are not required at the start, as our profitability analyses prove,” said Hornung.