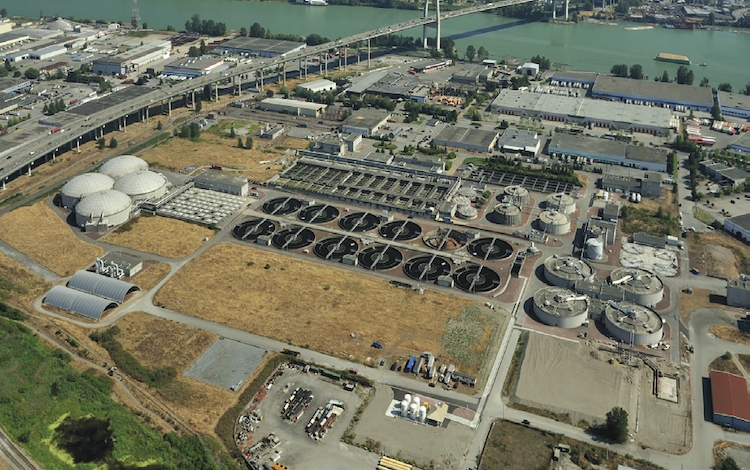 June 14, 2019 – Water’s importance is difficult to overstate. For 1.3 million people in the Fraser Sewerage Area, the vital resource is handled by Metro Vancouver Regional District’s Annacis Island Wastewater Treatment Plant (AIWWTP) in Delta, B.C. Given the facility’s crucial role, it must operate constantly. By 2016, however, its aging on-site variable-frequency drives (VFDs) were causing concerns about possible component failure.

To prevent service interruptions, an upgrade was necessary—one that could be completed without downtime. This posed a unique challenge to local VFD supplier 3 Phase Power Systems, which undertook the project with distributor E.B. Horsman & Son, manufacturer Rittal Systems and installing contractor Ross Morrison Electrical, based in Burnaby, B.C.

“Raw sewage could flow into the Fraser River if these pumps went down, so stopping them is not an option,” says Dwayne Donaldson, senior designer and project manager for 3 Phase. “By that point, you start looking at redundant systems.”

Quoting to spec
Among Metro Vancouver’s requirements for the VFDs were a 15-year life guarantee, an ability to operate at reduced capacity during a power module failure and an ability to withstand temporary power quality issues.

Space and scheduling were also critical considerations, given the site’s limited footprint for the system—5 x 1.4 m—and further constraints pertaining to the influent pump station (IPS), where work could only be completed in the summer months, when rainfall levels are lowest and overflow risk is minimized.

After 3 Phase quoted the project in 2016, the work took place from January to September 2017.

“The specification was quite complicated,” says Doug Kobylanski, 3 Phase’s vice-president (VP). “The specifying engineer was looking for an extensive amount of information with the bid, including harmonic, efficiency and factory acceptance test (FAT) data. In the end, we were told by the purchaser for Metro Vancouver we had the most complete project proposal he had seen!”

In that proposal, 3 Phase outlined its ability to meet challenging requirements, such as 97% system efficiency and maintaining present levels of voltage and current harmonic distortion. The team was also required to select VFDs that could stop IPS pump backspin and resume normal operation within 10 seconds.

With seven new drives to install, including three in the IPS area and four in the trickling pump area, the team selected Vacon NXP common DC bus VFDs with sinusoidal output filters, manufactured by Danfoss. The three drives for the IPS motors were configured for an 18-pulse front end and the remaining four for 12-pulse.

“The drives allowed us to connect to the existing supply transformer that had multiple output windings (18-pulse) and configure the output modules in a load-sharing configuration, such that we had built-in redundancy,” Kobylanski explains.

The VFDs were combined with Rittal’s TS8 enclosure and Maxi-PLS busbar system, in place of traditional cabling. CSA-certified to 3,200 A, the busbar helped meet the project’s power requirements and could be mounted into the modular TS8 enclosure within the space requirements. Reusing existing cabling and entry and exit points also helped resolve space issues, while a simple component assembly process saved time.

The proposal included detailed drawings created using Eplan Canada’s 3-D modelling software, which showcased 3 Phase’s approach for meeting such challenges as the tight spacing. Used in partnership with Rittal, the software provided a manufacturer-populated product database, including part numbers and precise measurements, which enabled the quick creation of a bill of materials and a Portable Document Format (PDF) file containing a 3-D visual of a fully assembled panel with components.

“When we were looking at the footprint in the quoting stage, we laid out each drive in its entirety in 3-D modelling space and attached these drawings to show the client we could deal with it,” says Donaldson. “That goes a long way toward getting the customer’s confidence.”

3 Phase also used the software to streamline traditionally time-consuming tasks, such as numbering the various devices, components, terminals and wires.

“Wiring up the control panels probably takes up between 40 and 50% of your time, once you have all your components assembled and identified,” says Roland Younk, general manager (GM) for Eplan Canada. “By using something like a tablet computer to show where you have to do the wiring, you can significantly increase the efficiency of this task.”

Testing performance
Adding to the comprehensiveness of 3 Phase’s bid was a commitment to test components before shipping them. Extensive research conducted at the Danfoss lab in Loves Park, Ill., verified the VFDs’ ability to meet the client’s requirements.

This work included full- and part-load testing to a maximum of 1,100 A, backspin testing and ambient temperature tests. The drives were shown to continue running even during a power loss, thanks to reserve power from the inverter, and to tolerate one minute of 115% continuous current and even 135% current surges.

“3 Phase was able to have their system fully tested by the factory, working and built,” says Sean Northcott, technical representative for Rittal. “That meant they could provide something that would work, without question.”

Indeed, the drives’ proven redundancy was especially crucial to meeting the requirement for constant, reliable operation.

“We paralleled multiple power modules together to get to 1,500 A on the IPS and 1,000 A on the trickling filters,” says Donaldson. “Any single module can go down at any time and the VFDs will continue running at almost 90% capacity.”

“The new VFDs were designed for dependability, to maximize uptime even when power quality problems or component failures are encountered,” says Louie. “The goal was to mitigate any single point of failure in the system.”

As mentioned, backspin control to minimize overflow risk was another crucial element of the project.

“We can now catch a backspinning pump, bring it back to zero speed and get it pumping again, without the use of mechanical brakes,” says Donaldson. “Also, the drive can detect when we have minimal power outages and we can use the pump to start generating some power to keep the system online and ride through short bumps.”

A modular approach
Additionally, all of the drive modules share the same part number. This allows for simplified maintenance and greater flexibility when purchasing spare parts.

“Nobody wants to spend a bunch of money on seven different spare drives,” says Donaldson. “With these drives, there’s one power module, one rectifier, you really need to keep spare. All of the modules are swappable across different drives. So, a drive from a different area could be used if needed.”

There are also a modular elements to other selected products for the project, of course, including the TS8 enclosure. These components’ off-the-shelf (OTS) availability and prior CSA approval yielded substantial time savings.

“This way, if something needs to be added or changed, that can easily happen without needing to wait or get a set of approvals,” says Northcott.

Selecting readily available products, he adds, can significantly reduce lead time, bringing it down to one week from as much as 20 or 24. Donaldson agrees, explaining this degree of availability helped 3 Phase work within a tight project timeline.

“The enclosure wires, busbars and fusing are all OTS components, to meet the scheduling needs,” he says. “Eplan helps with that, as well, because we are able to get an accurate bill of materials for purchasing early on.”

The drives provide reports on conditions such as panel temperature, allowing maintenance teams to plan ahead for potential problems.

The use of multiple smaller modules, rather than a single large one, also streamlines repairs. One or two team members can replace a power module in a matter of hours, without the equipment and lengthy work period that could otherwise be necessary with a larger module.

A feather in their cap
Looking back on the project today, those who were involved in its execution describe it as a clear success. The drives are continuing to perform well, outpacing the plant’s minimum requirements with up to 98% efficiency.

Backspin control is also exceeding expectations, with the drives proving capable of resuming normal operation in less than two seconds. And Northcott points out no ongoing maintenance from Rittal has been necessary following the completion of the project.

“3 Phase is only calling me to say they love it!” he says. “It’s been seamless.”

Indeed, 3 Phase describes the upgrade as a major accomplishment that has bolstered the team’s experience and ability to take on similar projects.

“This project is a huge feather in our cap,” says Kobylanski. “It has tremendously boosted our confidence in working on projects of this size. It has shown us we have the resources and supplier support to provide mission-critical equipment.”

On the client side, meanwhile, Louie says since the VFDs’ installation, the AIWWTP has displayed improved recovery time and successfully performed through power quality issues that would have tripped the systems’ predecessors.

“The VFDs have been running flawlessly for over a year,” he says. “This project is a good example that clear goals and expectations, engaged stakeholders, good communications, careful risk management and trust are key elements for success.”

Carly Midgley is a freelance writer and editor based near Toronto. She has covered numerous aspects of the architectural and engineering industries in her work, drafting technical articles for various trade publications. She can be reached via email at hello@carlymidgley.com.

This article originally appeared in the June 2019 issue of Electrical Business magazine.