News
Huawei #2 in wireless equipment based on 4Q2011 results 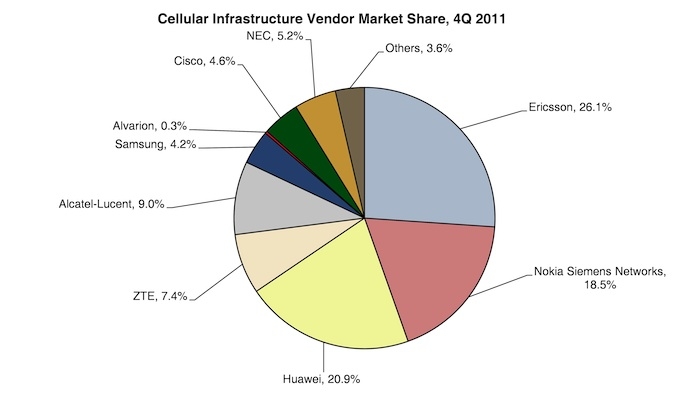 May 10, 2012 – A recent study by ABI Research notes that wireless equipment vendors performed well in the fourth quarter of 2011. While finishing strong in the last quarter of every calendar year is typical for vendors in this market, Huawei exceeded expectations and overcame Nokia Siemens Networks (NSN) to grab second place in the market, continued the study. Ericsson came out on top as the market leader, with approximately US$3.5 billion in wireless network equipment sales during 4Q2011.

“Huawei had an exceptionally good fourth quarter,” said practice director, mobile networks, Aditya Kaul. “Preliminary quarterly results of US$2.53 billion for wireless networks were up 54% quarter-on-quarter and 38% year-on-year. As a result, Huawei grabbed second place from NSN in wireless network equipment market share for the fourth quarter of 2011.”

NSN achieved US$2.4 billion in wireless equipment sales during 4Q2011.

The fourth quarter in 2011 was not as strong as it has been in previous years, despite it being the best quarter of 2011 for the majority of wireless equipment.

“In general, fourth quarter 2011 revenues were down year-on-year from fourth quarter 2010,” said Jim Eller, principal analyst, wireless infrastructure. “Wireless network operators did not spend as much in the fourth quarter as they have in past years, presumably taking a cautious approach due to uncertainty of the macroeconomic situation.”

Related
Wireless infrastructure market at 8-year low; more pain to come
Huawei joins WiGig Alliance board of directors
Wireless power systems market to surpass $15B by 2020
Active DAS equipment revenues to cross $1B by next year