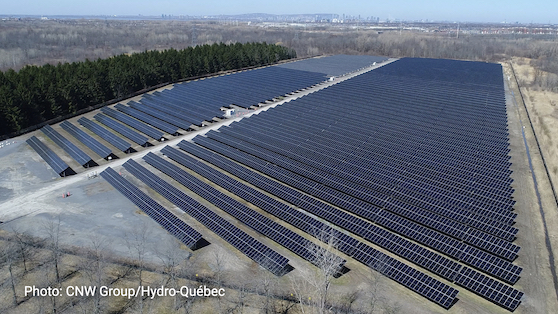 July 22, 2021 – Hydro-Quebec reports that, for the first time in its history, solar power is supplying the company’s grid.

The stations have a combined installed capacity of 9.5 MW and will be able to generate close to 16 GWh of solar power annually.

“I am very proud that the generating station in La Prairie pays tribute to Gabrielle Bodis,” said Sophie Brochu, president & CEO. “She was the very first woman to earn an engineering degree from Polytechnique Montreal, and she worked for Hydro-Quebec for over 35 years. It is also the first Hydro-Quebec facility named after a woman.”

Hydro-Quebec says these facilities will help the utility determine whether solar power “is a good fit for our generating fleet, our transmission grid and the Quebec climate”.

Gabrielle-Bodis is constructed on the site of the old La Citiere thermal generating station in La Prairie.

Robert-A.-Boyd is constructed on the site of Hydro-Quebec’s research institute in Varennes.