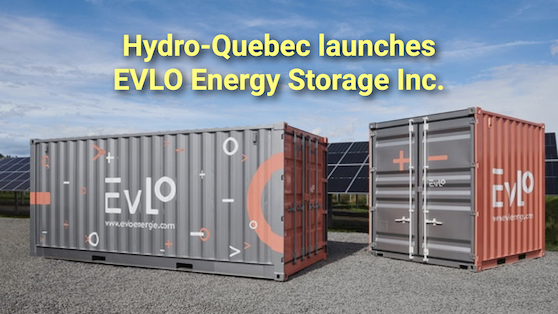 “Energy storage will play a crucial role in the energy transition,” said Sophie Brochu, Hydro-Quebec president & CEO. “We firmly believe that the know-how Quebec has acquired with regard to batteries will help develop solar and wind power. Our products will also have useful applications in existing power grids, such as in managing consumption peaks.”

The systems are intended mainly for power producers, transmission providers and distributors, as well as the commercial and industrial markets for medium- and large-scale storage. EVLO systems also include power control and energy management software.

EVLO technology is the result of more than 40 years of R&D on battery materials by Hydro-Quebec, says the utility, adding the storage systems have been tested in real-world operating conditions, such as peak shaving at the Hemmingford substation and the Quaqtaq off-grid system.

The technology is also being used in the Lac-Mégantic microgrid and in Hydro-Quebec’s solar farm in La Prairie.

Along with the news of this launch, EVLO also announced it has signed a memorandum of understanding with Innergex énergie renouvelable inc. to participate in the Tonnerre project in France, which involves the installation of a 9 MWh storage system in the transmission system operated by France’s national transmission provider, RTE.