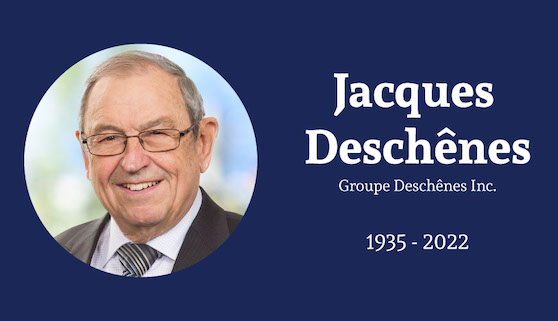 The announcement was made by Martin Deschênes, vice-president of the board, and François Deschênes, president & CEO, in a jointly signed letter to industry.

“Our father loved and took great pride in his company and everyone who works there or had worked there in the past,” say Martin and François.

According to the letter, Jacques joined Deschênes & Fils Ltée in 1954. He held various roles before becoming its third president and general manager in 1973. He then served as president and CEO of Groupe Deschênes Inc. from 1988 to 2000.

“Under his leadership, the company grew from a single location in Montreal to 50 in Quebec and Ontario,” reads the letter. “He laid the foundations that still shape our organization today.”

Jacques served as chair of the board until 2009, then as honorary chair until the most recent meeting in December 2021.

“Through his great involvement in several causes and organizations, he has built a reputation and a notoriety recognized in our industry, in the business world in general, and the community.”

Funeral details will be announced at a later date.