Lighting enhances a canopy entrance and lobby for an acute care centre. 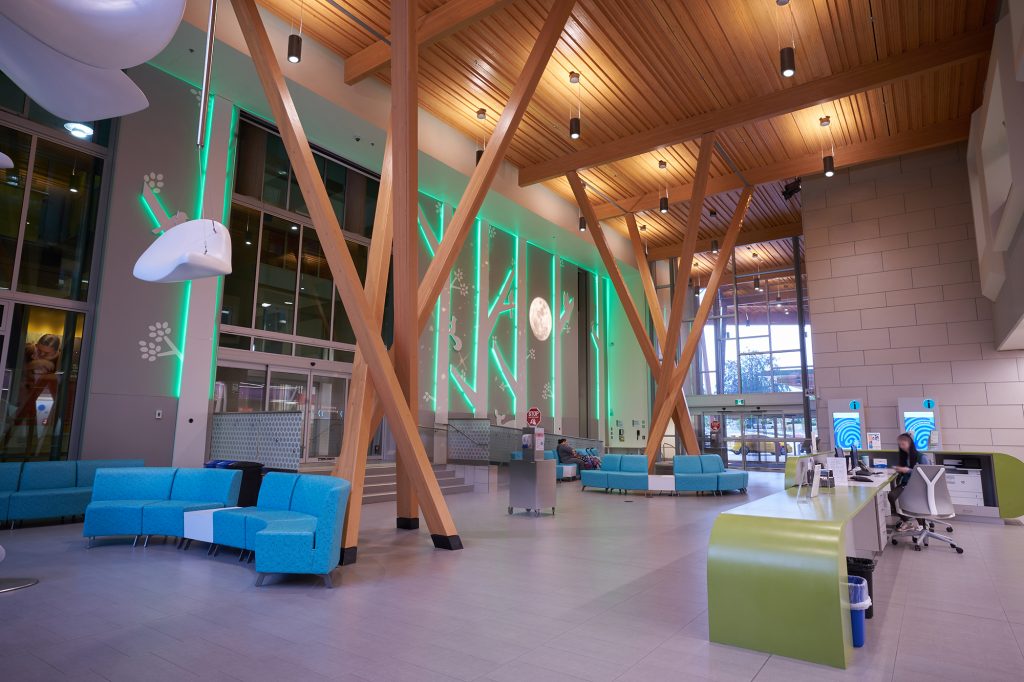 Cylindrical pendant lighting was specified for both indoors and outdoors. Photo: Ryan HK

The BC Children’s Hospital treats expectant mothers, newborns and children of various ages from across British Columbia. To meet the needs of more than 200,000 patients a year, it continues to be expanded. The hospital’s new $640-million Teck Acute Care Centre, for example, which is located on the grounds of the Vancouver campus, welcomed its first patients in late 2017.

The eight-storey, 640,000-sf facility was designed as a gentle healing environment to reduce anxiety and perceived pain for its patients, with colourful murals, sculptures and other artwork predominant throughout the halls and treatment rooms. The waiting area even features a giant virtual interactive aquarium.

Lighting, too, plays a crucial role in creating a sense of calm for both patients and their parents. 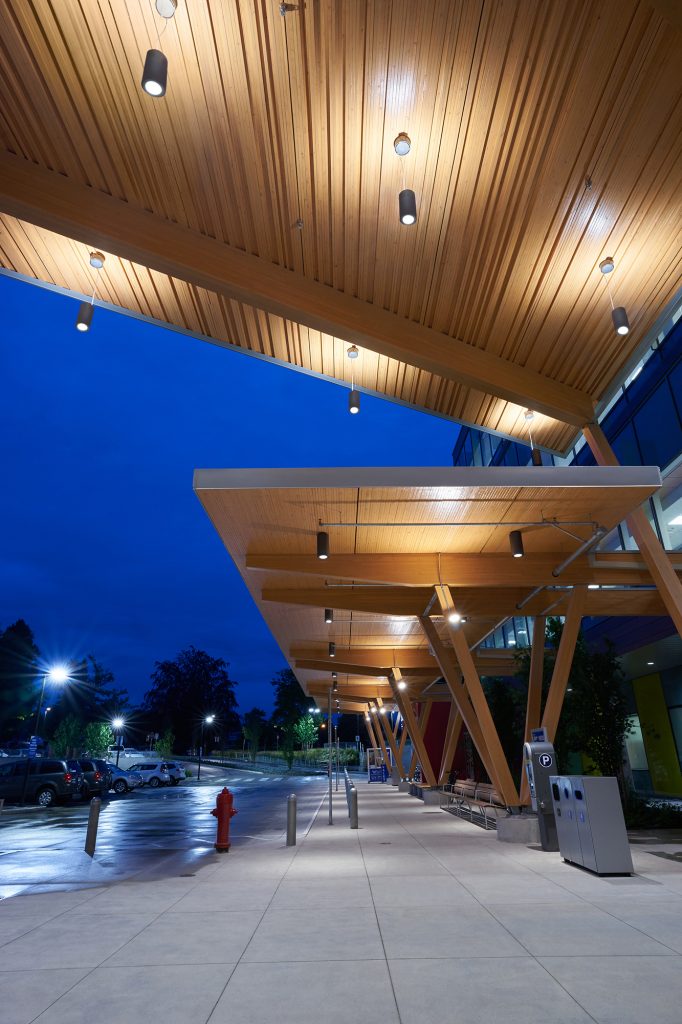 Cylindrical pendant lighting was specified for both indoors and outdoors. Photo: Ryan HK

The lighting designer group at SMP Engineering, a Calgary-based electrical service provider, worked on all areas of the new centre, including the main lobby and the exterior canopy at the main entrance.

For the interior lobby lighting, the designers turned to Vancouver-based agent CDM2 Lightworks and selected Montreal-based Luminis’ Syrios SY806 up/down pendant, whose light module can be aimed precisely where it is needed, to blend in with the Teck Acute Care Centre’s contemporary architecture. The 8-in. cylindrical pendant delivers enough light to illuminate the floor below, but also provides uplighting to accent the beams and the more than 20-ft high ceiling.

The exterior zone offered its own specific challenges, due to varying canopy heights. As such, a combination of direct and indirect pendants and surface-mounted lighting fixtures were used.

For the higher portion of the canopy, SMP’s team again selected Syrios SY806 luminaires, which can light the pathway well while simultaneously highlighting the wooden structure far above it.

For the lower portion of the canopy, meanwhile, they selected a surface-mounted version of the Syrios SY810, which would allow sufficient clearance for people walking below. This luminaire highlights the canopy overhang and intentionally ‘pushes’ light away from the building in a controlled way, so as to precisely illuminate the walkway as it leads into the lobby. The lighting designers strove to seamlessly mix and match the SY806 and SY810 luminaires to maintain a consistent visual esthetic.

Meeting a variety of needs 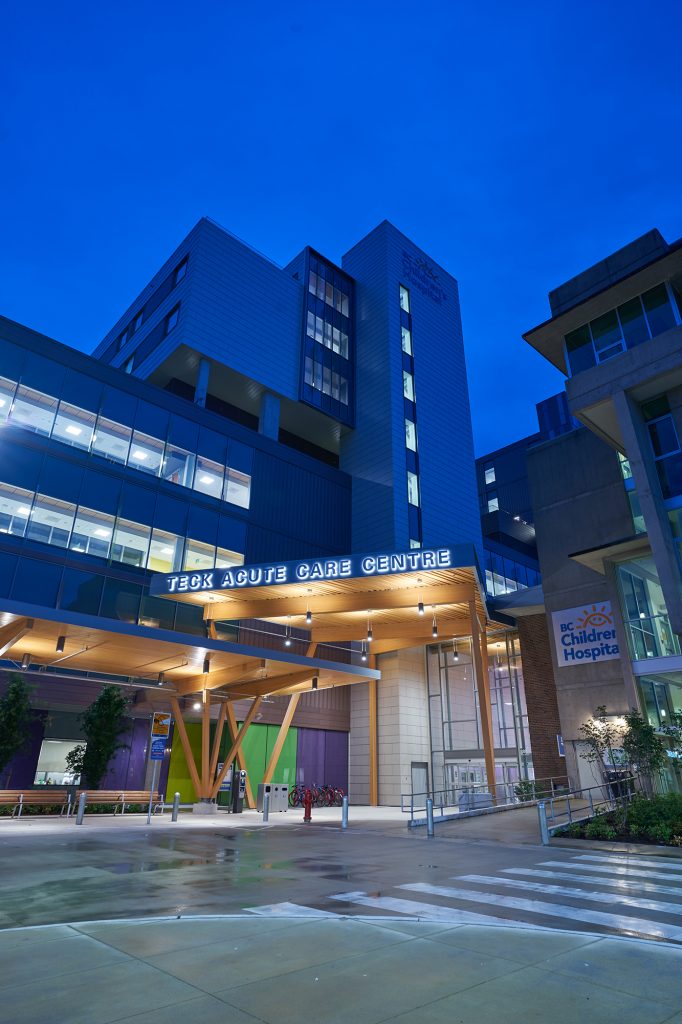 Beyond esthetics, though, the project also had to meet stringent energy-efficiency targets to help the building achieve Leadership in Energy and Environmental Design (LEED) Gold certification, as well as comply with local American Society of Heating, Refrigerating and Air-Conditioning Engineers (ASHRAE) requirements. With this in mind, the performance of the fixtures’ direct and indirect lighting elements was carefully considered before choosing them.

In these ways, SMP’s designers achieved a lighting scheme for the entrance and lobby that is soothing and impressive in equal measures. The indirect light distribution is very even, while the direct illumination is powerful but with minimal glare.

The design delivers light in the right places to ensure both the exterior and interior areas are well-illuminated, welcoming and functional spaces for patients, visitors and employees alike. And from a technical standpoint, the selected products meet all required standards and should continue to offer high-quality, energy-efficient lighting for the hospital for many years to come.

Jason Broadhurst is director of marketing for the Luminaires Group, a Montreal-headquarted manufacturer of interior and exterior lighting products under a variety of brands. For more information, visit www.theluminairesgroup.com.

This article was first published in the December 2019 issue of Electrical Business.