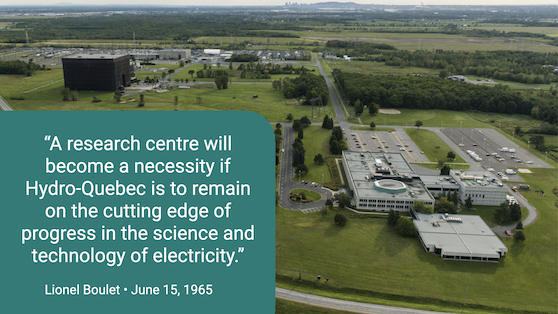 “A research centre will become a necessity if Hydro-Quebec is to remain on the cutting edge of progress in the science and technology of electricity,” said Lionel Boulet, IREQ’s founder, on June 15, 1965. Five years later, on September 29, 1970, Premier Robert Bourassa inaugurated IREQ in Varennes.

When it was founded, the research institute’s purpose was to perfect power transmission technology on 735-kV lines (the technology had been developed a few years earlier by Jean-Jacques Archambault).

At the time, the general laboratories building (now called the Lionel-Boulet pavilion) housed 60 laboratories and the offices of 80 researchers.

Today, IREQ involves some 500 experts and encompasses the Hydro-Quebec research centre and the Centre of Excellence in Transportation Electrification and Energy Storage (Varennes), as well as the energy technologies laboratory (Shawinigan).

Throughout its history, IREQ says it has been at the heart of key power grid research projects, including:

• The spacer-damper: created in 1979 and marketed around the world.

• HYPERSIM: a power system simulator used to perform tests prior to the commissioning of substations, high-voltage lines and other key equipment on the system.

• The in-wheel motor that inspired the creation of TM4 (today, Dana TM4), the manufacturer of electric motors that power electric buses.

• The creation of large-scale energy storage systems, the first of which have been installed in actual operating conditions in Hemmingford, Quaqtaq, Blainville and Lac-Mégantic.

• And battery research, whose IP is protected by 800 patents and used in many devices around the world, from cell phones to large-scale storage systems and electric cars.

“Innovation has been at the heart of Hydro-Quebec’s history since the outset,” said Sophie Brochu, president & CEO, Hydro-Quebec. “Faced with the challenge of the energy transition and armed with the boldness of the IREQ teams, everything points to this tradition of innovation continuing for a long time to come.”

To explore IREQ further, check out this panoramic video that includes a visit to IREQ, and takes you inside the high-voltage laboratory in Varennes.