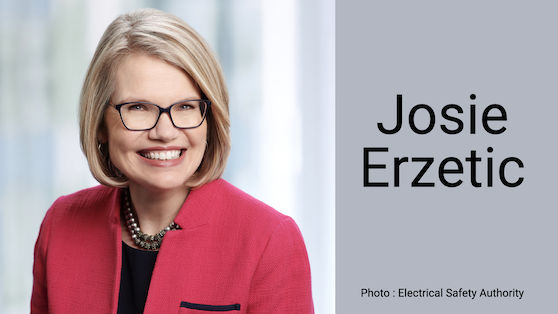 “[We] are confident that she will continue to evolve the company’s culture as a modern regulator committed to working with its partners and licensed communities, promoting safety education and reducing regulatory burden, all in aid of making Ontarians safer,” said Annette Bergeron, board chair.

Prior to this appointment, Erzetic served as ESA’s chief regulatory officer and general counsel, managing areas such as licensing, electrical safety, codes and technical standards, and product safety. In addition, she oversaw the activities related to communications, government and stakeholder relations, as well as legal and privacy matters.

Erzetic possesses over 25 years of experience in the electricity sector. Prior to joining ESA, she held various roles at Ontario Power Generation, including vice-president, Corporate Business Development, responsible for the development of hydro, thermal, solar and energy storage projects.

“[Erzetic] has embraced all aspects of ESA’s mission and envisions a streamlined and modern organization that will thrive in an environment that values partnerships with our employees and stakeholders,” said outgoing president & CEO, David Collie, who will retire on July 1.

Effective April 4, Collie assumes the role of Special Advisor to the board to support the leadership transition.

“We would like to thank David for his many contributions and, in particular, for the launch of risk-based oversight, which is critical to the company’s success,” Bergeron added.

ESA is an administrative authority acting on behalf of the Government of Ontario. It is responsible for administering specific regulations related to the Ontario Electrical Safety Code, the licensing of electrical contractors and master electricians, electricity distribution system safety, and electrical product safety.