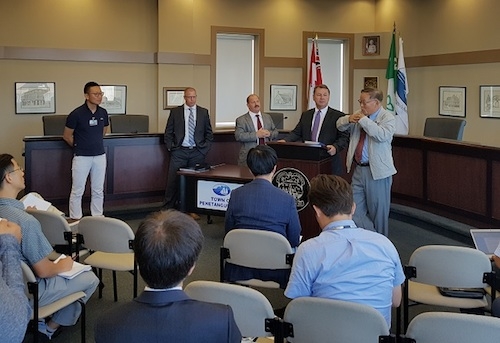 The delegation was welcomed by municipal officials and then toured the facility, which currently provides several hours of backup power supply for approximately 400 customers in the area, according to Powerstream. It is located adjacent to PowerStream’s Robert Street Municipal Substation.

The Korean media representatives—from NEWSPIN, the Busan Daily, Korea IT News, the Aju Business Daily, CBS and the Financial News—interviewed several smart grid experts from PowerStream and KEPCO about the technology and its impacts on customers in Penetanguishene.

“The South Korea journalists that joined us here today, and the media outlets they represent, are well-respected in our country,” said Seongchul Kwon, principal researcher with the KEPCO Research Institute. “We look forward to seeing their stories about the tour of this facility.”

For additional details on this microgrid and how it works, read our news from earlier this summer HERE.

More on the initial Memorandum of Agreement (MOA) the two companies signed last July HERE, and news from when construction began HERE.