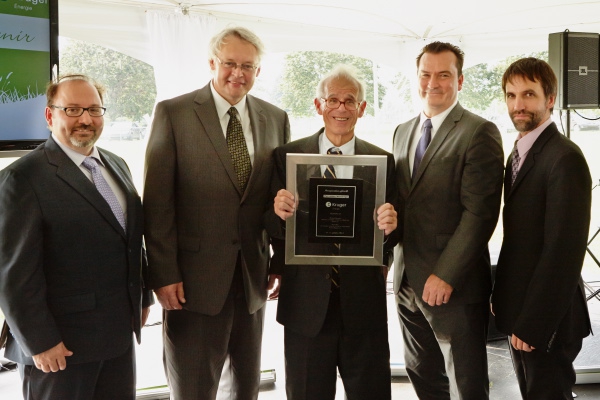 The ceremony was attended by Joseph Kruger II, chair and CEO, Kruger Inc.; Gaétan Lelièvre, minister for regions and minister responsible for the Gaspésie-Îles-de-la-Madeleine region; and several local elected officials and residents.

“We take great pride in the work we have done in Montérégie,” said Jean Roy, senior vice-president and COO, Kruger Energy. “From the very start, relations with the local communities have been based on openness, trust and cooperation and the result is a wind farm that is well integrated into its environment, and a project that brings significant economic benefits to the region.”

This is Kruger Energy’s first wind farm in Quebec, and its third in Canada. The Montérégie project consists of 44 wind turbines installed in five Montérégie municipalities: Saint-Isidore, Saint-Rémi, Saint-Michel, Saint-Constant and Mercier. The electricity generated will be sold to Hydro-Quebec Distribution under a 20-year contract.

Founded in 1904, Kruger Inc. is a producer of publication papers, tissue, lumber and other wood products, corrugated cartons from recycled fibres, and wines and spirits.