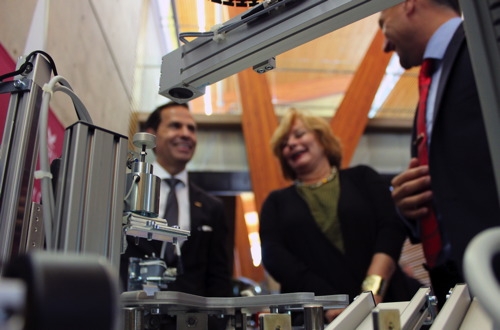 September 15, 2016 – Kwantlen Polytechnic University (KPU) and Siemens Canada are joining forces to address the technical skills gap in Canada and accelerate the “implementation of Industry 4.0 advanced manufacturing concepts”. Beginning in early-to-mid 2017, KPU will offer students the Siemens Mechatronics Systems certification program in association with the Siemens Canada Engineering and Technology Academy (SCETA)—established in 2014 and based out of Siemens Canada’s head office in Oakville, Ont.

KPU will establish a mechatronics lab facility in Surrey, B.C. Equipment will include electrical and mechanical components purchased by KPU from approved suppliers including Festo Didactic and programmable logic controllers (PLCs) from Siemens Canada. This lab will also “set the foundation for future academic offerings”, noted KPU, including a diploma in Advanced Manufacturing.

“We are honoured to collaborate with KPU to bring mechatronics training to British Columbia, offering students the opportunity to pursue this globally recognized certification that will ultimately help prepare them to succeed in Canada’s top industries upon graduation,” said Robert Hardt, president and CEO of Siemens Canada.

Mechatronics is the combination of mechanical, electrical and computer software technologies, as well as control and systems theory into a single system used in production and manufacturing, explains Siemens.

The Mechatronics certification courses, designed to be integrated into the university’s existing curriculum, will be offered to KPU students in two levels (Assistant or Associate) and taught by KPU faculty trained at the Siemens Technik Academy in Berlin, Germany.

WATCH our video of the Mechatronics Simulation & Demonstration Centre launch at Seneca College, also in partnership with Siemens Canada HERE.