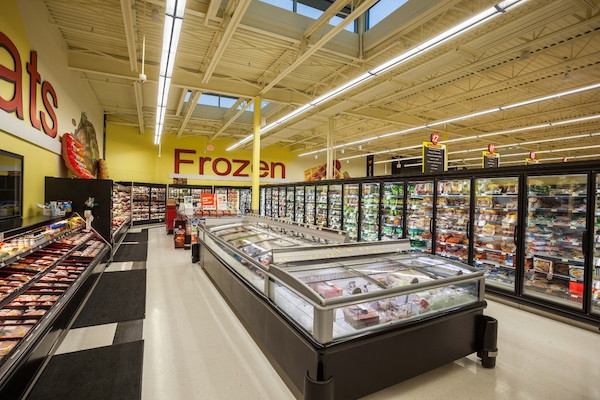 While designing a new store build, with a focus on value, Buy-Low business development co-ordinator Louie Pulice sought lighting solutions to make the location in Langdon, Alta., as cost-efficient as possible, without sacrificing the quality of the shopping experience.

He worked with electrical designer Dan Melchior to develop a lighting plan that would meet Buy-Low’s standards while lowering the store’s operating costs. After conversing with his sales agent, Bryan Lortie of Vancouver-based CDm2 Lightworks, Melchior developed his lighting design with, primarily, Cree LED lighting products, for which Wesco was the distributor.

Melchior ended up selecting CS18 LED suspended ambient luminaires for lighting down the store’s aisles and CR24 LED troffers for the deli, bakery and offices. Both products promised 90-plus CRI and consistent colour temperatures. In addition, WS4 surface ambient luminaires were deployed inside the freezers and coolers and Edge LED high-output area luminaires in the parking lot.

With a lighting plan ready, the next step was to present the plan, product samples, photometric data and payback analysis (for three years), comparing traditional technology versus LED technology, to the Buy-Low development team. The job got the green light and moved ahead.

“The quality of light is non-intrusive and the diffusers provide a soft, even distribution down the aisles,” says Melchior.

Bringing in an electrician to Buy-Low Foods stores could cost up to $2,000 per visit. With the new lighting, which comes with a 10-year warranty, Buy-Low expects to save $8,745 in annual maintenance costs.

“As a designer, it only makes sense—with the rising costs of electricity—to choose products that will save the owners money in the long term,” says Melchior. “This includes the inherent cost savings from the maintenance side, which represents a huge part of their operating costs.”

“When we built the store and opened it up, there were a lot of comments on how comfortable it was,” Pulice adds.

With files from Cree. This article appeared in the February 2019 issue of Electrical Business magazine.