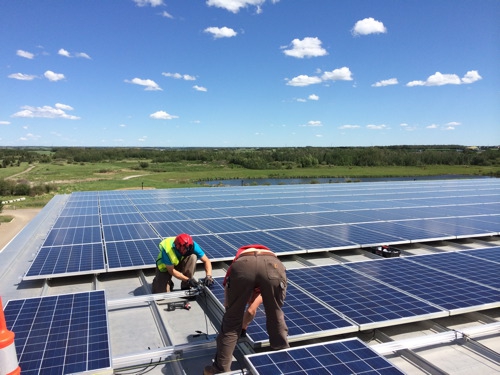 July 15, 2016 – Canada’s largest commercial rooftop solar array will soon be complete, according to the City of Leduc and ENMAX. The 1.14MW system located at the Leduc Recreation Centre is approximately 25% larger than any other system in the country, ENMAX says. Installation will be complete by the start of the Alberta Summer Games—being held in Leduc next month—and generating power by July 31, 2016.

“The City of Leduc has recently committed to developing a GHG action plan through participation in the Partners for Climate Protection program,” said Greg Krischke, mayor of Leduc. “The sheer size of this solar installation as well as the subsequently planned Operations Building retrofit, will lead to emission reductions of over 1000 tonnes per year, the equivalent of taking about 200 cars off our roads.”

The system consists of 3622 PV panels covering just over 78,000 sf. and will generate 15% of the centre’s annual energy consumption, ENMAX claims. This means it will reduce energy costs by up to $90,000 annually.

In addition to the Recreation Centre, Leduc and ENMAX are also preparing to install 630 kW (0.63 MW) of solar panels on the city’s Operations Building, which they say is expected to fully cover that facility’s electricity needs. ENMAX says it has now installed approximately 38% of all solar-generated electricity in Alberta.

The total cost of the two projects is $3.1 million, which was funded in part through the Climate Change and Emissions Management Corporation’s (CCEMC) support of ENMAX’s solar leasing project.