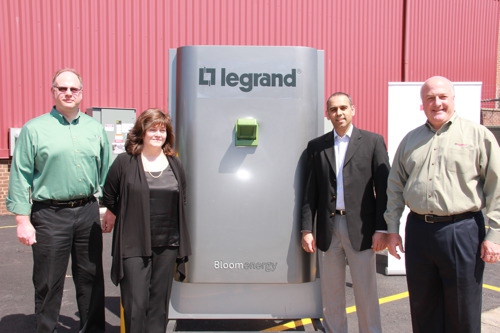 April 18, 2016 – Legrand North America is flipping the switch today on a new 500kW, solid-oxide fuel cell (SOFC) system to provide power to its HQ in West Hartford, Conn., and EBMag is there to watch them “Flick the Switch”.

The special event also includes a tour of Legrand’s Experience Centre and the factory, led by:

The Bloom Energy SOFC sits adjacent to the company’s corporate offices and Wiremold manufacturing facility, and is expected to produce up to 88% of the electricity to every building on the 263,000-sf, 100-year-old campus. Fuel cell installation took about 20 days.

Legrand says it wanted a solution that would reduce the energy consumption and carbon footprint of its corporate facility while reducing its energy spend. The SOFC will generate a roughly 21% reduction in energy intensity and as much as 50% reduction in CO2 emissions, says Legrand; at system capacity, the net savings will be about $2.4 million over the first 10 years.

The company says it looked at other alternative energy sources, “but either the sustainable benefits were not as great, the cost to deploy was higher or the power output was not as dependable”. For instance, says Legrand, the fuel cell produces power 24/7 while solar panels typically produce power during daylight hours only, and their capacity can be affected by weather.

SOFCs are electromechanical devices that convert the chemical energy of fuel and an oxidant directly into electrical energy without combustion. The cells require a sand-like powder instead of precious metals (reduced cost), explains Legrand, and conversion from fuel to electricity happens at twice the rate of conventional technologies.