Features Articles
Lessons from the back of the pack: Breaking with status quo to take the lead 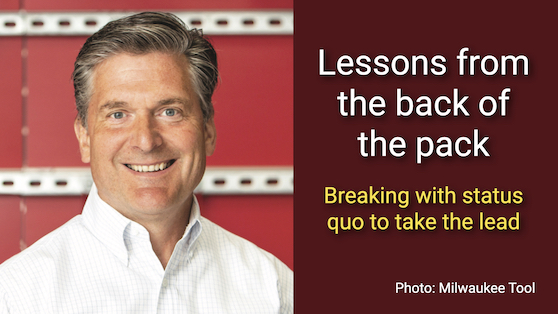 October 22, 2021 – An overarching goal of Electrical Business Magazine is to shed light on innovative technologies and solutions, and new opportunities in existing and emerging sectors that will, hopefully, lead to better business outcomes for electrical contractors.

Part of realizing a better outcome is to consider doing something different from everyone else; offering something that separates you from the pack.

Craig Baxter is the president of Techtronic Industries Canada, the parent company of Milwaukee Tool. By his own admission, he eats and breathes power tools. “The whole reason I got into the industry was my love of power tools. It’s a dream job. I love every minute of it.”

He oversaw Milwaukee’s juggernaut expansion into the cordless tool space—a market in which the toolmaker was largely absent at the time.

“Back in 2007, Milwaukee had virtually zero share of the cordless market,” Craig says, then adds jokingly, “I mean, we were in 8th place in a 7-horse race.”

Today, Milwaukee is a dominant force in the cordless power tool segment. So how did they go from zero to hero in such a short period? Are there takeaways from Craig’s story that we can apply to our own businesses?

This is not a story about cordless power tools, per se, but rather a story about taking chances; about going with your gut and being willing to gamble on something new; about the patience to see through that which you believe in, and doing everything you can to keep your customers loyal.

Going with your gut

Craig remembers when cordless power tools first launched in the 1980s. “They could drive a small fastener, and that was pretty much it.”

Nonetheless, it was a market with potential, yet Milwaukee was positioned very solidly in last place.

The ruling battery technology at the time was nickel-cadmium. Rather than play catch-up, Milwaukee decided to go against the grain: they switched to a completely different battery chemistry. “We started with a completely lithium-ion-based battery line-up, which we believed was superior in every way, shape and form to Ni-Cad,” Craig recalls.

And being the 8th horse in that 7-horse race meant they weren’t tied to an old technology.

“Our competitors had innovator’s dilemma: they had massive market share, but they were also tied to an antiquated technology. We weren’t going to upset anybody when we decided to go with lithium-ion!”

Still, it’s a massive departure from the status quo! Was Craig anxious about making the switch?

“Trust me, I didn’t lose one minute of sleep when we made that change. In fact, it made for a better night’s sleep, because I knew we were moving to a completely superior technology relative to Ni-Cad right from the get-go.”

And this gave users a reason to convert to Milwaukee’s cordless solutions “right then and there”, says Craig. “And that’s exactly what began to happen”.

Don’t give them a reason to leave

Regardless of how it’s powered, a tool has to get the job done. “When you put a battery into a tool that was formerly powered another way, you have to ensure the performance is at least as good as the previous source of energy; otherwise, it’s not a reasonable solution for the user.”

“So, over the last 25 years, the batteries and the technology within the tools have gotten to the point where we absolutely can cut cords off of tools, and users have not been disappointed. And that has really revolutionized the way that users are able to perform the tasks they have in the field—to the point where you can use one battery to run some 200 different solutions.”

While cordless tool batteries have gotten better over time—becoming more powerful, holding a charge longer—Milwaukee has purposely avoided changing the interface between tools and batteries.

“This is critical, because the second you change that interface, you give someone the opportunity to switch brands; after all, you’ve just rendered a bunch of their tools useless!” Craig notes. “This is why every current and future Milwaukee tool is compatible with every battery we’ve ever had, and vice versa. That interface is a really critical consideration in the cordless game.”

Unlike a wall socket, everyone’s cordless power tool battery is a proprietary design. “So when you bring a user into your family, you’ve locked them in, because the cost to convert to another platform can be prohibitive.”

Clearly, this is a competitive advantage, “but only as long as we can keep delighting our users with solutions they need and want”.

Sometimes, a solution comes along that’s immediately understood and snapped up by the market. Other times, a little more patience is required.

“When a user is used to doing something a certain way, you have to spend time with them and let them get comfortable with a new way to do something,” Craig says. “So we’re willing to bring forward a solution that will change the life of an electrician and support it until it grabs hold and becomes successful. We don’t need to hit it out of the park.”

To that end, Craig feels they’ve done an extraordinary job of engaging with their core users. “We just don’t give them a reason to go elsewhere. That’s the truth.”

“Our users don’t necessarily treat their tools with kid gloves, so our solutions have to withstand incredibly challenging environments: temperature, water, flat-out abuse… whatever.”

But the total solution goes beyond the tool, and even the battery. “You need to optimize the performance of the tool with the right accessories, which is why we spend a lot of time, effort, and money making sure our accessories are delighting the user every bit as much as our cordless tools.”

And then there is service, into which Milwaukee has also been investing, “Because service is what prevents downtime”. The company will even customize its service solutions, depending on the user’s needs, and is also willing to come to you with its service vehicles.

“It’s an arms race, right?,” Craig says. “If we continue to obsess over the user like we do, we will never fail to provide them with solutions that improve the way they perform their tasks each and every day.”

This feature—plus more great content—appears in the October 2021 edition of Electrical Business Magazine. Even more back issues are located in our Digital Archive.