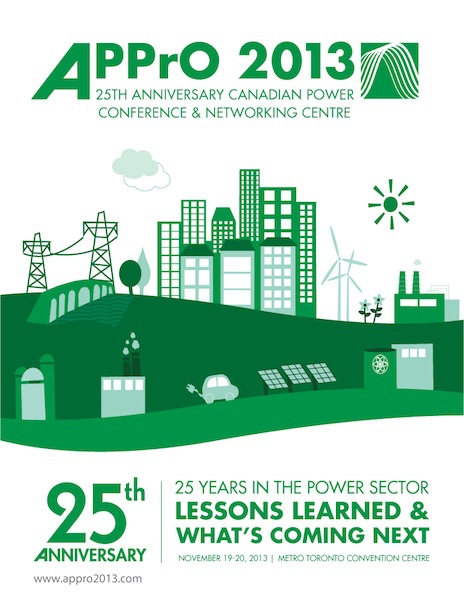 October 30, 2013 – It’s not too late to join Electrical Business at APPrO 2013 (the 25th anniversary of the Canadian Power Conference & Networking Centre) November 19-20 in Toronto and, like Jan Carr, walk away thinking: “The APPrO event is one of the very best conferences the power industry has… it’s a great honour to be part of it”.

This year’s speaker lineup includes the likes of:

Two days of programming aim to address the challenges faced by the electrical power industry in the coming months and years ahead. Also, visit the Power Networking Centre, which organizers say is the most “comprehensive tradeshow in the Canadian power-gen field”.

Simultaneous programming on Aboriginal business perspectives is presented in co-ordination with the Ontario Sustainable Energy Association (OSEA). And APPrO would not be complete without the Power Banquet Dinner, presented by Borden Ladner Gervais, which is followed by more networking at the Power Mixer at the Steam Whistle Brewery, hosted by Blakes.