Features Articles
Light up your urinal while you pee at Glastonbury 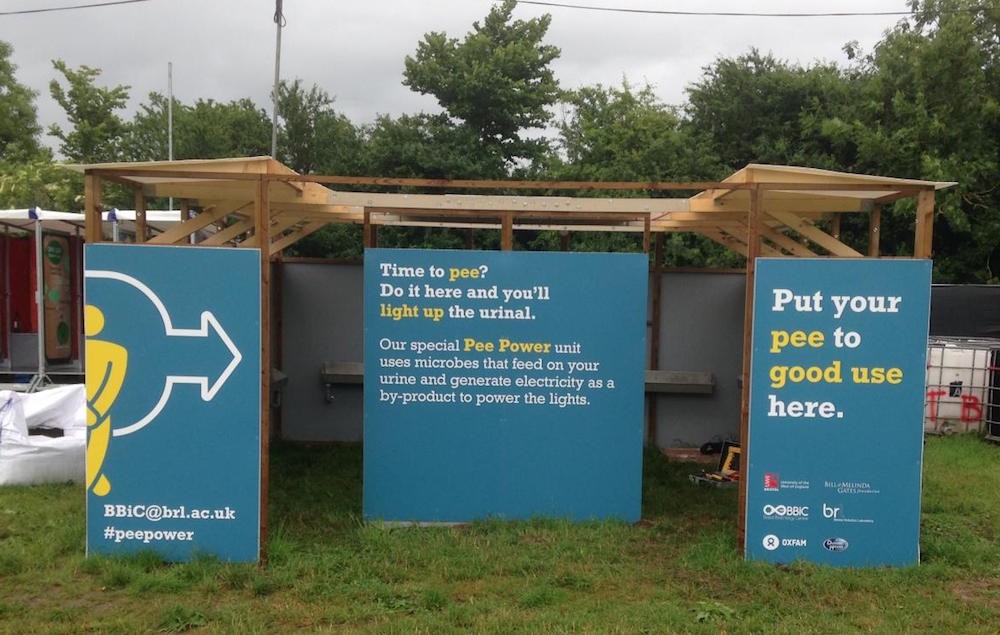 July 11, 2016 – If you read our news Please pee on my socks… I need to make a call, then you already know urine can be transformed into electricity with the help of bacterial metabolism. Now researchers have upped the ante with a full-blown public urinal at the U.K.’s Glastonbury music festival.

One of those public urinals can generate enough electricity to light the cubicle’s LED tubes using a system developed by scientists at the University of West England (UWE), Bristol.

The technology in the prototype is based on microbial fuel cells [MFCs]; like batteries, they have an anode and a cathode, explained Irene Merino, a researcher on the team who works alongside Daniel Sánchez.

The cells are installed inside a container that collects the urine (currently only from males due to the design of the urinals). Inside, bacteria colonize the anode electrode and act as a catalyst, decomposing the organic material in the urine.

This decomposition releases protons, which travel from the anode to the cathode across a semi-permeable membrane, and electrons, which travel through an external electrical circuit. To complete the cycle, an oxygen reduction reaction also takes place in the cathode. The process generates enough energy to power light bulbs or LED tubes.

“Our project is aimed at developing countries with a view to improving or incorporating sanitary facilities,” Merino emphasized. Really, anywhere there is limited electricity generation could benefit.

At present, the researchers have carried out two field tests: one at the campus of their university, with limited numbers of participants; and another at Glastonbury festival, where last year it was tested by roughly 1000 users daily. Their findings have been published in Environmental Science: Water Research and Technology.

In both experiments, the electricity generated was used to illuminate the interior of the cubicle where the urinal was installed. The university campus prototype contained 288 MFCs and generated an average of 75 mW, whereas the Glastonbury prototype included 432 cells and generated 300 mW.

In collaboration with Oxfam and other organizations, the researchers are now planning to test the urinals in India or in some regions of Africa; specifically at refugee camps, in communities, at schools and in public toilets that lack lighting.

“The ultimate purpose is to get electricity to light the toilets and, possibly, also the outside area, in impoverished regions, which may help improve the safety of women and children in countries where they have to use communal toilet facilities outside their homes,” concluded Ioannis Ieropoulos, director of the Bristol BioEnergy Centre at UWE, who leads the research.