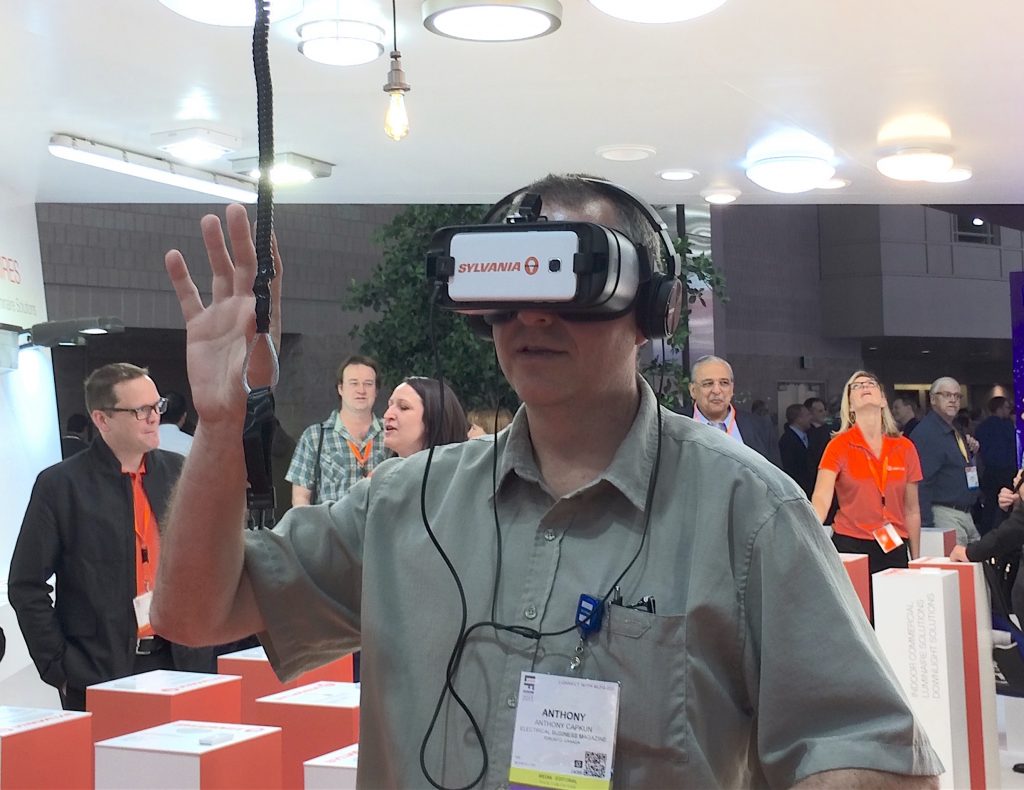 June 1, 2017 – After a few years of missing Lightfair due to scheduling conflicts, I was finally able to attend the 2017 edition and, boy, the exhibitors were putting their best feet forward. I haven’t seen so many large, colourful and distinctive booths since… well, maybe never.

It doesn’t seem that long ago that CFLs were all the rage (despite their horrible light), fluorescent tubes were still showcased prominently, and LED bulbs were a novelty… a curiosity you could only find at a few niche exhibitors.

Those early LED bulbs were about $60 US apiece. (I still have a sample of one at home) and they were dumb compared to today’s offering of LED troffers, connectivity, colour tuning, form factors, etc.

On that note, there are a few main takeaways from this year’s Lightfair. The first is that, despite the fact fluorescents are still being produced—as well as the odd metal halides—LED lighting is now the norm. And while this light source has its, shall we say, nuances (a polite way of saying that, sometimes, they’re a bloody pain), it’s also the source that’s getting all the R&D and design attention. So besides getting better and cheaper, LED sources are increasingly attractive and able to handily fit into previously unheard-of applications.

(This led to at least one conversation regarding certification bodies like CSA and UL not evolving alongside the industry fast enough to keep pace with technological advancements in the space, but that’s a whole other story.)

The second and most-important takeaway from this year’s Lightfair is not even about the light source, per se, but how IoT-ready lighting fixtures are the perfect vehicle for creating a connected environment. Because fixtures are installed everywhere, they can be embedded with any number of low-cost, IoT-ready sensors for heat mapping, daylight harvesting, occupancy and more.

The biggest hurdle, however, is a lack of standards for interoperability that allow you to procure/install IoT-friendly fixtures from multiple OEMs and have them work seamlessly together. As Fulham’s Russ Sharer says, “Even manufacturers that command a large market share, such as Apple, realize their technology won’t thrive without interoperability”.

So here’s hoping the lighting OEMs come together on the creation of such a standard for full interoperability—then we can truly unlock and exploit the potential of the Internet of Things.

* This column also appears in the June 2017 edition of Electrical Business Magazine.

• The video is a compilation of the individual clips I tweeted live from the Lightfair 2017 show floor. It includes Sylvania Ledvance, Wattstopper Legrand, Feit Electric, Acuity Brands, Lutron, Eaton, Crestron and the ever-popular Adapt Tech “beerbot”.

• All photos were shot from my phone and tweeted @EBMag while at the show.

Related
VIDEO: LED Lighting ‘State of the Union’ from Lightfair 2013
Standing in solidarity with the family • From the Editor, D&S Spring 2017
Lightfair 2010 upon us – Check it out
PHOTOS: Celebrating Canada150 at Nedco Electrifest XI (2017) • 1 of 2
Tags