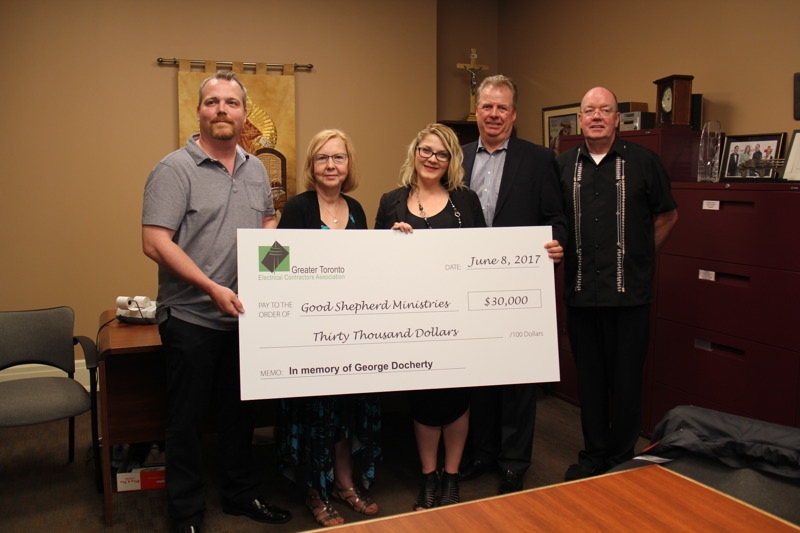 … and come back on better than ever!

January 22, 2018 — 365 days a year, 95 clean beds, 1371 meals. These are just some of the figures detailing the services The Good Shepherd Centre provides on a daily basis for homeless men and women. These tasks would be pretty difficult to deliver, however, without proper lighting and energy supply.

Enter the Canadian Electrical Contractors Association’s University of Toronto student chapter which, through an international competition, took on the task of retrofitting the lighting to improve the energy efficiency of the shelter’s 100-year-old building.

The challenge of the Challenge

The 2015 Green Energy Challenge—hosted by Electri International and the National Electrical Contractors Association (U.S.)—brought these organizations together. The competition focused on the “development of a backup power system and resiliency plan for an existing facility with demonstrated critical power needs”.

Teams were required to conduct an energy audit of a building or facility on campus or in their community. They then had to submit energy benchmarking and critical load analysis, efficiency upgrades that might reduce critical load demand and introduce a backup power supply/microgrid solution for part or all of the facility.

This was the CECA UofT student chapter’s first competition, says Tom Vivian, president of Consult Energy Management Solutions and CECA advisor for the UofT chapter, who says CECA has had a close relationship with the student chapter since its establishment in 2014.

The association’s goal in working with a student chapter is “to educate and get information to university students about the electrical contracting industry”. In addition to helping students compete in international competitions, CECA has been involved with various courses and seminars—even instituting a Contractor 101 program at UofT.

With regard to the 2015 Green Energy Challenge, Vivian explains CECA helped identify possible recipients and acted “as liaisons between our contractors or mentors that were used in the challenge by the student chapter,” because part of the Green Energy Challenge is to partner up with a contractor to help them with the technical aspects of the competition.

Eventually, the students entered the competition with a proposal to carry out a lighting retrofit and install an emergency backup generator, as well as a PV solar panel array, at The Good Shepherd.

While the students came just shy of being one of three finalists in 2015 (finishing in 4th place), their proposal generated a lot of interest in the community.

Graybar (who had already helped the students execute the initial energy audit) and All Trade Industrial came aboard as the distributor and contractor, respectively.

Graybar also worked with the students to create a rebate plan, determining the amount of money The Good Shepherd would receive from the municipal, provincial and federal governments for the energy savings.

After the company completed a site audit and did a cost-benefit analysis, Darryl Schell, electrical manager at Graybar and project lead, met with The Good Shepherd to “get the ball rolling” and discuss Graybar’s package, the cost of the lighting retrofit, and the savings driven through the package, he says.

Meantime, All Trade oversaw the removal of the centre’s old lighting fixtures and the installation of new fixtures from Cooper Lighting (Eaton’s Lighting Division) and GE, while IBEW members completed the work. Specifically, over 400 Eaton LED bulbs and fixtures, along with 87 GE LED lamps, were installed, along with motion sensors in some areas.

“Not only are the LED bulbs brighter, longer lasting, but safer, too, because they don’t overheat,” said Brother David Lynch of Good Shepherd Ministries.*

The motion sensors were installed in areas that are only used at certain times of the day, such as the dining areas which, for security reasons, used to run their lighting continuously. The result is lower electricity costs and improved security.

All Trade Industrial faced a few small challenges implementing the lighting retrofit, such as having to work around The Good Shepherd’s operation.

“This meant they couldn’t have a steady flow of work during the construction,” Vivian explains. “So this required some shiftwork, and [they] also needed to ensure that, as old lights were coming out, the new lights [were] installed within a short duration.”

Additionally, part of the UofT students’ goal was to come away with a Net Zero outcome. While unsuccessful, Vivian says “We were able to get close”.

“The cost of the fixtures was $40,000 at-cost from Graybar, and the Greater Toronto Electrical Contractors Association […] were able to get involved in this project by giving a donation of $30,000 in the name of George Docherty, one of their members who had passed away.”

The payback covered the overall net cost of $10,000 within a few months, he adds.

“The annual energy savings driven by us doing a lighting audit was $31,926.52,” Schell elaborates. “The hydro rebate given—the cheque that came back from Hydro to The Good Shepherd—was $13,950. It was an eight-month payback, and a 118% return on investment.”

In the end, he says, “the job ran very smooth, fixtures got decided on in a timely manner, [and] recycling everything worked out”.

While the lighting retrofit was a success, the second phase—implementing a generator—has only just begun, and the third phase—installing a PV solar panel array—will not happen.

According to Vivian, the second phase will come to fruition because “the emergency generator is something they [the Good Shepherd] desperately need”.

“If there’s a breakdown of power during their busiest seasons [the holidays], you’re faced with various issues running those kitchens [or] not being able to run them.”

The Greater Toronto Electrical Contractors Association will be in charge of the generator installation. Bob O’Donnell, executive vice-president with GTECA, will lead the project.

Regarding the solar PV array, Vivian says “the incentives for photovoltaic solar panelling right now are not as attractive in Ontario” as they used to be. The benefit from the payback has decreased since the plan was put together in 2015, and it would also take longer for The Good Shepherd to see that payback.

But Vivian and Schell both feel the project has been a resounding success, as the UofT students saw several aspects of their project come to fruition, while The Good Shepherd started saving significantly on its energy bill.

It should come as no surprise that the CECA UofT students have continued to enter competitions, finishing as finalists in the 2016 and 2017 Green Energy Challenges.

Members of the Docherty family and Bob O’Donnell, EVP of the Greater Toronto Electrical Contractors Association, present a cheque for $30,000 in memory of George Docherty to Br. David Lynch, executive director of Good Shepherd Ministries.

This article originally appeared in the November/December 2017 issue of Electrical Business Magazine.