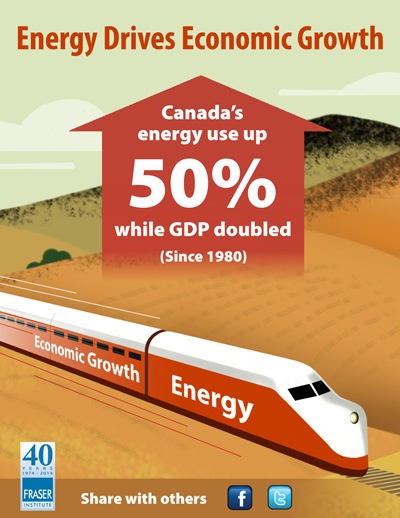 May 15, 2014 – Limiting the availability and raising the cost of energy can hurt Canada’s overall economy and weaken future growth, finds a new study released today by the public policy think-tank, Fraser Institute.

The study, Energy Abundance and Economic Growth (links to PDF), examines the long-term relationship between economic growth, energy availability and energy consumption with evidence from Canada and around the world.

“Energy use and economic output grow together over time, and the evidence shows that if you limit energy use, you damage future economic growth prospects,” said Ross McKitrick, study co-author, Fraser Institute senior fellow, and economics professor at the University of Guelph.

“It’s obvious—energy drives economic growth. Yet policy-makers across Canada continue to treat energy consumption as a bad thing, and act as though cutting energy use is an end in itself,” McKitrick said.

For example, policies that increase energy costs or limit its availability (e.g. renewable energy mandates or the required use of biofuels such as ethanol or biodiesel) diminish competitiveness, reduce rates of ROI, and reduce economic growth, says the institute, adding that conservation mandates and strict appliance standards (e.g. water heaters, refrigerators) often “have no conceivable environmental benefit” but are justified simply because they cut energy use.

“The Ontario government, for instance, claims that the Green Energy Act, which increases energy costs, thereby making it less abundant, is part of the province’s economic growth strategy. The evidence points in the opposite direction—the act will limit future economic growth,” McKitrick said.